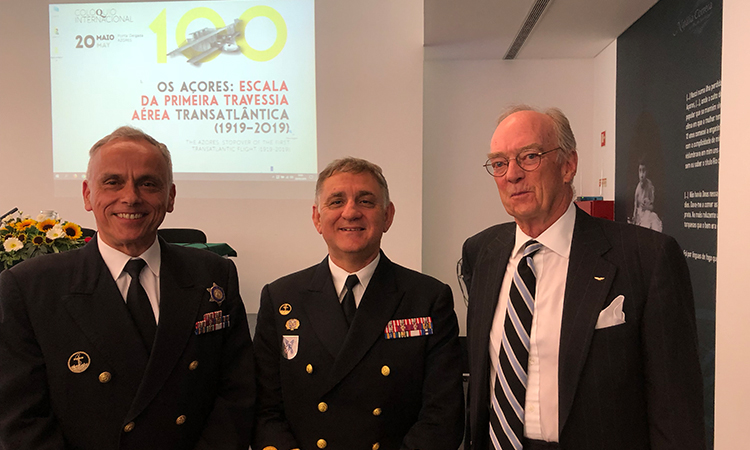 The conference had the participation of Prof. John Cann, first from right.

The first transatlantic flight, in May 1919, linked the United States of America and the Azores in the annals of history.  This weekend we celebrated this historic landmark in both Horta and Ponta Delgada.

Deputy Chief of Mission Herro Mustafa participated in the centennial celebration of the first transatlantic flight by Albert Cushing Read. Events were organized by the City Council of Horta on May 17.  Ms. Mustafa was accompanied by U.S. Consul to the Azores Jason Chue and U.S. Embassy Defense Attaché Colonel Andrew Bernard.

After rousing performances of the “March of the NC-4,” named after the airplane that completed the crossing, and the national anthems of the United States and Portugal by the local musical group Sociedade Filarmónica Unânime Praiense, Horta MayorJosé Leonardo Silva presided over a formal ceremony that included speeches by Minister-Counselor Mustafa and Regional Secretary Gui Menezes, representing the President of the Regional Government of the Azores.  Ms. Mustafa highlighted the long friendly relationship that binds Faial, the Azores, and the United States, including many unique historical milestones, such as the original U.S. Consulate in Horta, the Dabney family, and the Azorean Refugee Act, which allowed thousands of Faial’s residents to emigrate to the United States following the eruption of the Capelinhos Volcano.

The Portuguese post office, Correios de Portugal, also unveiled a postage seal commemorating the event.  At the conclusion of the ceremony, Dr. Carlos Guilherme Riley delivered a presentation on “The First Aerial Crossing of the Atlantic as seen from the Azores.”

The next day at the Teatro Faialense, the U.S. Air Force band Winds Aloft performed to a full house. This marquis musical ensemble is based at the U.S. Air Forces in Europe.  After Horta they traveled on to Ponta Delgada for another concert on May 19 at City Hall.

On May 20, Ponta Delgada hosted a conference titled “The Azores: Scale of the First Transatlantic Air Crossing 1919-2019.” The event was organized by the Azorean Institute of Culture and included a presentation by retired U.S. Air Force Commander John P. Cann.

The U.S. Consulate to the Acores thanks its partners for their cooperation and friendship: PontaDelgada City Hall, Horta City Hall, and Azorean Institute of Culture.