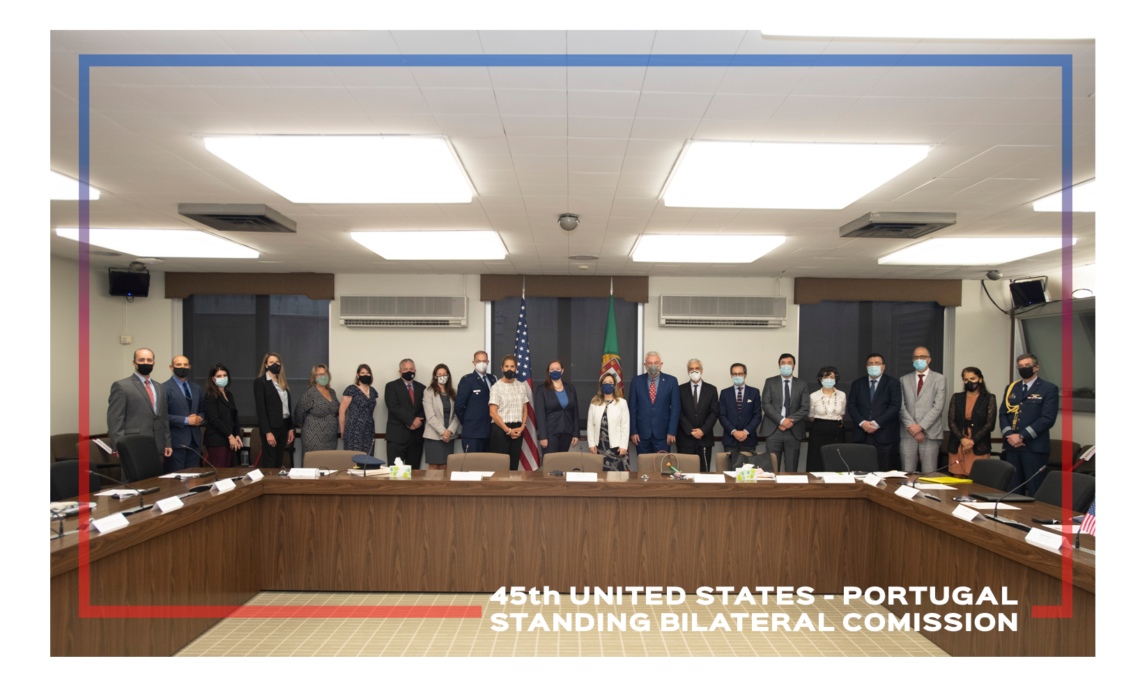 1) The 45th Session of the United States-Portugal Standing Bilateral Commission (SBC) met in-person July 28 in Washington, D.C. Both sides committed to strong Transatlantic ties and shared values which contribute to mutual prosperity and security.  The SBC discussion underscored cooperation and an exchange of views on bilateral and international priorities, such as recovery from the COVID-19 pandemic, cyber security, trade, climate and energy, Indo-Pacific, China, Africa, Latin America, as well as NATO, security, and defense matters.

2) The United States and Portugal discussed their shared commitment to building back better on health, climate, and economic recovery.  They reaffirmed the importance of ensuring that supply chains for critical national security technologies and medical supplies are secure.  The participants committed to strengthen global health security, pandemic preparedness, and response to health emergencies and future outbreaks and renewed their shared commitment to support global access to vaccines.  The SBC welcomed efforts to exchange information and expertise with a view to resuming as soon as possible safe and sustainable travel from the EU to the United States.

3) The SBC welcomed the strong Transatlantic cooperation during the Portuguese presidency of the Council of the European Union (EU), including President Biden’s participation in the March 25 European Council summit, and the June 15 U.S.-EU Summit.  The SBC lauded the June 15 U.S.-EU Summit Statement on a renewed Transatlantic partnership.  The United States congratulated Portugal on its successful EU Council presidency, noting its five main deliverables: the Social Summit, the adoption and signature of the EU Climate Law, the implementation of the financial instruments for recovery, the swift approval of the EU Digital COVID certificate and, with the successful EU-India Summit, its focus on the Indo-Pacific region.

4) On trade, both sides welcomed the five-year suspension of tariffs related to the Large Civil Aircraft disputes and continued engagement to reach a definitive solution.  On the steel and aluminum tariffs, both sides recalled the May Joint European Union – United States statement on addressing global steel and aluminum excess capacity and reaffirmed the commitment to find solutions before the end of the year.

5) The SBC welcomed high-level engagements with the United States during Portugal’s EU presidency, occurring frequently at the ministerial level. These engagements renewed discussions on climate, trade, and defense, and created unprecedented coordination on key foreign policy issues including sanctions.  Additionally, high-level engagements occurred on justice and home affairs matters, with the adoption of a joint statement and with the participation of Department of Homeland Security Secretary Alejandro Mayorkas and U.S. Deputy Assistant Attorney General Bruce Swartz.  During Portugal’s presidency, the United States and the EU deepened defense and security coordination, including the Council approval of U.S. participation in the Permanent Structured Cooperation (PESCO) Military Mobility project.  This historic decision marked the beginning of robust U.S. participation in EU defense initiatives.

6) The SBC highlighted the importance of continued engagement in Africa and in Latin America, the shared commitment to human rights and democratic values, and the importance of strengthening resilience and democratic institutions.  Both sides recognized the importance of closely consulting and cooperating on a full range of issues in the framework of our respective, similar multifaceted approaches to China, which include elements of cooperation, competition, and systemic rivalry.  The United States and Portugal recognized challenges to joint interests from the People’s Republic of China (PRC), especially in the economic and trade areas, and shared concerns about the PRC’s ongoing human rights abuses in Xinjiang, Tibet, and Hong Kong.

7) The SBC underlined the excellent bilateral cooperation in science, technology, energy, and environment, acknowledging the importance of student, academic, and research exchanges in these fields, and praising the important support of the Luso-American Development Foundation (FLAD) and the Fulbright Commission.  The United States and Portugal hailed the results of the April 22-23 White House Leaders Summit on Climate, during which the Portuguese Environment Minister made valuable contributions to the discussion on adaptation.  Both sides committed to work closely to increase climate ambition leading up to COP26 in Glasgow and to advance ocean-based climate solutions in the lead-up to the second UN Ocean Conference, which is planned to be held in Lisbon in 2022 and be co-hosted by Portugal and Kenya, and the seventh Our Ocean Conference.  Both countries made pledges to strengthen marine scientific research, innovation, and cooperation at the All-Atlantic 2021 Conference.  The SBC reaffirmed the importance of European energy security and diversification and decided to explore opportunities for collaboration on clean hydrogen and other clean energy value chains, as well as the development of the next generation of batteries, acknowledging Portugal’s significant lithium resources and respective commitments to reach net zero emissions by 2050.

8) Both sides welcomed the continued cooperation on preventing and fighting forest fires and highlighted the recent Fulbright exchange between the Portuguese Agency for Integrated Rural Fire Management (AGIF) and the state of Colorado and the ongoing collaboration between AGIF and Calfire. The SBC also welcomed the work in progress towards the upcoming 2021 U.S.-Portugal Bilateral Smart Cities Conference for deepening municipal bilateral collaboration on smart cities as another example of the depth of the bilateral relation.

9) The SBC noted the importance of digital transition for economic recovery and welcomed the SINES 4.0 project as an investment symbolizing the strength of transatlantic trade and investment.  It further underscored the need to fortify cybersecurity, secure 5G networks, and ensure safe, secure, and trusted cross-border data flows with appropriate privacy protections, including by using only trusted providers in our telecommunications networks.  The participants recognized challenges from digitization of the global economy and welcomed the launch of the U.S.-EU Trade and Technology Council as an opportunity to promote innovation, prosperity, and shared democratic values.  The participants identified mechanisms to further expand the scope of bilateral cooperation in cybersecurity, namely through the establishment of a dedicated subcommittee under the Justice and Home Affairs Committee.  Portugal also highlighted the interest in negotiating a mutual agreement on the exchange of classified information.

10) The SBC welcomed the United States’ accession as an associate observer to the Community of Portuguese Speaking Nations (CPLP).

11) The SBC commended Portugal and the United States for their significant contributions to overseas peace operations and international security. Both sides also acknowledged the excellent cooperation on efforts to counter ISIS and affiliated groups in Africa, and a desire to deepen collaboration on capacity building efforts in Mozambique.  The SBC commended both U.S. and Portuguese military training activities with the Mozambican Armed Forces in 2021, and Portugal’s leadership in successfully advancing the EU’s Training Mission in Mozambique.

12) The SBC commended the Portuguese Presidency of the Council of the European Union for strengthening EU-NATO cooperation, enhancing EU-Africa partnership in Security and Defence and for achieving progress in the area of maritime security, namely through the launch of Coordinated Maritime Presences in the Gulf of Guinea.

13) Portugal and the United States reaffirmed their commitment to NATO, the cornerstone of the wider Transatlantic partnership, and welcomed the conclusions of the Brussels NATO Summit ˗ particularly Leaders’ approval of the NATO 2030 agenda for Alliance adaptation, and the high-level discussions that reinforce this relationship based on shared values.  The SBC reaffirmed their commitment to the Wales Summit Defence Investment Pledge, acknowledged the importance of military deployments in support of Alliance activities, and noted the decision to end the military operation in Afghanistan.  The SBC welcomed the official inauguration of the NATO Communication and Information Agency Academy in Oeiras and looks forward to its contribution to NATO´s technological superiority.

14) The SBC commended the growing bilateral security and defense dialogue, including the May 2021 discussion between the Portuguese Minister of National Defense and the U.S.  Secretary of Defense and Portugal’s hosting of multiple high-visibility military exercises in 2021, despite the pandemic.  The SBC also noted that some of these exercises included strong U.S. participation, reflecting the deep interoperability of the armed forces. Both countries noted the importance of fully implementing the Women, Peace and Security agenda within Allied Armed Forces.  Portugal highlighted a new defence policy initiative designed to foster gender equality.

15) The SBC underlined the renewed strategic role of the Azores and its potential for advancing Atlantic security cooperation. In this sense, it welcomed positive developments in Atlantic security, including the launching of the Atlantic Centre on May 14. The SBC welcomed continued collaboration in maritime security and defense capacity building in the Atlantic. The SBC commended the 65th Air Base Group’s support to the Regional Government of the Azores’ pandemic response and lauded the recent US Air Force decision to add 45 military and civilian positions to the 65th Air Base Group’s staff, in order to meet current operational requirements.

17) The SBC noted the four environmental experts’ meetings convened since December to discuss technical findings at sites 3001 and 5001 and encouraged efforts to reach a common technical understanding based on scientific data.  In this regard, both sides drew attention to the importance of the June in-person fieldwork conducted jointly by technical experts from the U.S. Air Force Civil Engineer Center and Portugal’s National Laboratory of Civil Engineering, recognizing the importance of efforts to reach a shared technical assessment, and science-based understanding.  The SBC also supported the continued exchange of data, further consultations, and exchanging of reports and technical expertise to ascertain the potential for future risks to human health, including to U.S. personnel, consistent with our respective national legal authorities.

18) The SBC took note of the Technical Commission discussion regarding the possibility of a comprehensive infrastructure plan to address common safety and security concerns.

19) The SBC highlighted the strength of U.S.-Portugal economic cooperation in the Azores and encouraged further cooperation in the field of education, health, environmental and digital transition.  The SBC received an update on developments by the Regional Government of the Azores and expressed the desire to resume tourism and economic investments between the United States and the Azores as soon as the conditions allow.  Recalling the importance of the Committee for Cooperation with the Azores, the SBC also encouraged the facilitation of the mobility of students, professors, and researchers, between the University of the Azores and American colleges and universities, particularly in areas of Azorean diaspora, namely through scholarships.  The SBC also recognized the potential of the Azores in geothermal energy and other alternative sources of energy and encouraged further collaboration in the field of energy transition and decarbonization to facilitate the Azores becoming a hydrogen production region.

20)  The SBC planned for the next meeting to take place in Lisbon in December 2021.