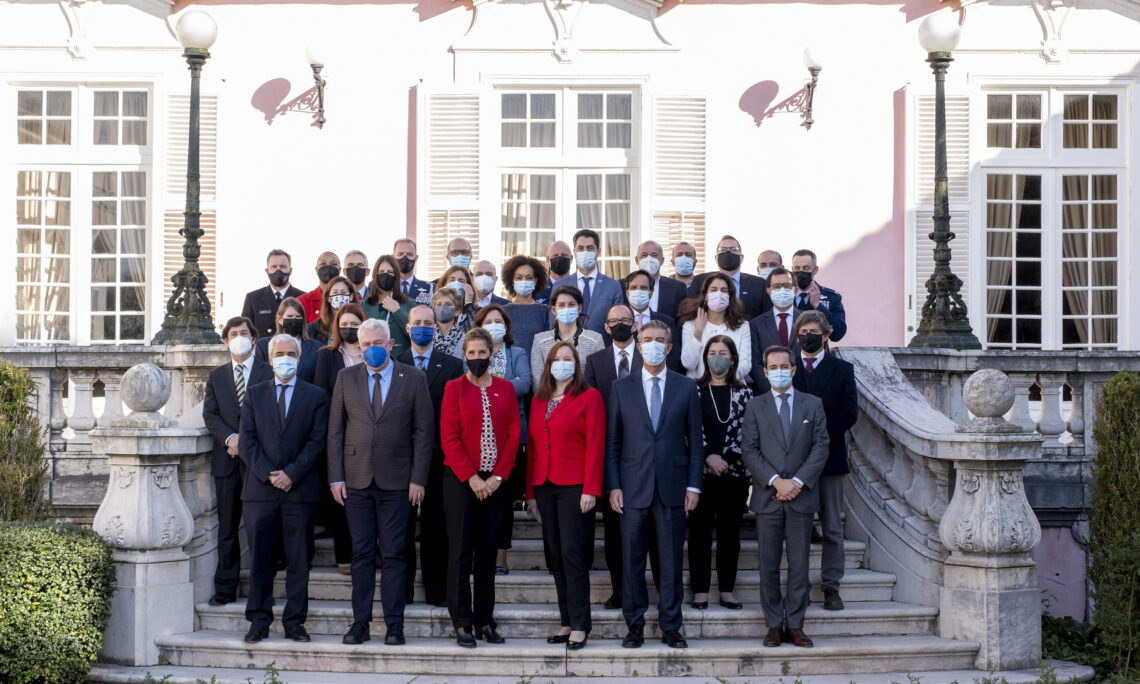 1. The 46th Session of the Portugal-United States Standing Bilateral Commission (SBC) met on December 17 in Lisbon to discuss developments in the bilateral relationship, underscoring the common values and shared norms that bind the two countries and their citizens. The SBC also discussed international matters, such as issues related to Latin America, Africa, the Indo-Pacific, China, Russia, as well as NATO and general security and defense matters, with both sides reiterating their commitment to transatlantic security and the importance of a strong NATO-EU partnership.

2. Highlighting the importance of the bilateral partnership, the SBC noted the most recent high-level meetings, including between Speaker of the U.S. House of Representitives Nancy Pelosi and the Portuguese President and Prime Minister; as well as the visits of the Minister for Science, Technology and Higher Education, Manuel Heitor and the Minister of the Sea, Ricardo Santos to the United States. The SBC also noted the visit to Portugal of a delegation from the California Foundation for the Environment and the Economy.

3. The SBC underlined the excellent bilateral relationship in many domains, particularly the science and technology partnership and the significant student, academic, and research exchanges, praising the the important support of the Luso-American Development Foundation (FLAD), the Fulbright Commission, and the Foundation for Science and Technology (FCT), and also welcoming the latest Unicorn Company launched under the Carnegie Mellon University Portugal program, which specializes in remote teams and international payroll management. Recognizing the importance of people-to-people contacts, the SBC welcomed the growing cultural and linguistic exchanges and the significant integration of the Portuguese language in an increasing number of elementary and secondary schools in the United States, as well as in graduate programs in American universities, with the recent creation of three chairs in Portuguese studies being noteworthy.

4. The SBC explored opportunities to continue building upon the strength of this strategic partnership, opening the way for future synergies. In this regard, the SBC had an exchange of views on matters of mutual concern, such as the space-climate-oceans nexus, the possible use of space technology to prevent forest fires, and the importance of clean energy for energy security. Paving the way for the future, the SBC commended the discussion on space and science focused on climate awareness and disaster prevention. Building upon the continued cooperation on preventing and fighting forest fires and the Portuguese National Space Strategy, Portugal presented a proposal for a joint venture on a “Space to soil mission” for very high-resolution earth observation, involving the Atlantic International Research (AIR) Centre’s Earth Observation Laboratory in the Azores for sustainable land management and forest fire prevention.

5. The SBC reiterated previous commitments to energy security and diversification and decided to explore opportunities for collaboration in areas of common strategic interest, such as clean hydrogen and other clean energy value chains, noting in this regard the geostrategic relevance of the Port of Sines.

6. Both sides recognized the centrality of a strong Transatlantic relationship, based on human rights and democratic values, for security and prosperity. This relationship is essential for addressing current and pressing challenges, including the recovery from the COVID-19 pandemic and the resulting economic crisis, with both sides emphasizing the shared commitment to strengthen global health security and to ensure global access to vaccines.

7. The SBC welcomed Portugal and the United States’ mutual commitment to reinforcing cooperation in trade-related matters. The recently established EU-U.S. Trade and Technology Council, the first meeting of which took place in Pittsburgh on September 29, provides the basis for a reinforced bilateral transatlantic trade and economic relationship in areas of mutual interest. The SBC also welcomed the resumption of streamlined travel from the EU to the United States.

8. The SBC also highlighted the importance of joint action to raise climate awareness and to combat the climate crisis, noting the pledges made at the 2021 United Nations Climate Change Conference (COP26), the Global Methane Pledge, and the work underway in the lead-up to the seventh Our Ocean Conference, which is to take place in Palau from February 16-17, 2022, and the second UN Oceans Conference, planned to take place in Lisbon from June 27 to July 1, 2022. With the ocean playing a vital role in regulating climate, by retaining more than 90 percent of excess heat and almost a third of anthropogenic CO₂ emissions, both sides intend to continue to work together to keep the interlinkages between the ocean and climate change high on the international agenda and leverage Sustainable Development Goal 14 through solutions to ocean problems through enabling science and innovation, concrete actions, and promoting a sustainable blue economy.

9. The SBC discussed several issues of mutual concern in the global political arena, such as the fight against terrorism, including within the Atlantic and African regions. In this respect, both sides intend to support further initiatives of mutual interest and to deepen consultations on the security situation in the Sahel region, on Maritime Security, particularly in the Gulf of Guinea, and on security in northern Mozambique. The SBC welcomed the ongoing bilateral and multilateral efforts by Portugal and the United States to support capacity-building initiatives for the Mozambique Armed Forces, including the establishment of a European Union Training Mission (EUTM Mozambique) and the U.S. Joint Combined Exchange Training (JCET).

10. The SBC assessed the current situation in Latin America, underscoring the need to restart the negotiations on Venezuela in Mexico. The SBC expressed concern with the Russian military buildup along the Ukrainian border and reiterated the importance of dialogue and diplomacy to prevent new conflicts and to resolve the conflict via implementation of the Minsk Agreements. They underscored their commitment to impose severe costs on Russia if it escalates its aggression against Ukraine. Both sides recognized the importance of closely consulting and cooperating on a full range of issues in the framework of our respective, similar multifaceted approaches to China, which include elements of cooperation, competition, and systemic rivalry; both sides also expressed concern about the PRC’s ongoing human rights abuses in Hong Kong, Xinjiang, and Tibet.

11. While acknowledging the excellent bilateral relations in the field of security and defense, the SBC reaffirmed Portuguese and the S.´ commitment to reinforcing existing ties in areas of mutual interest, such as the security of the Atlantic Ocean, the strategic role of the Portuguese territory, namely the Archipelago of the Azores, Maritime Security in the Gulf of Guinea, as well as peace and stability in sub-Saharan Africa.  The SBC also encouraged further cooperation on cyberdefense, space, emerging disruptive technologies, adaptation of both countries’ defense and security policies to climate change, and the implementation of the Women, Peace and Security agenda.

12. Portugal and the United States reaffirmed their commitment to NATO – the cornerstone of the wider Transatlantic partnership – and expressed their expectation that the new NATO Strategic Concept, to be adopted at the June 2022 Summit, would fully reflect Allies’ shared understanding of global threats and challenges affecting the Euro-Atlantic region, from a 360 degree perspective. Portugal and the United States share a view on the need to maintain clear and open tracks for political consultations among Allies, and on the importance of preserving cohesion within the Alliance.

13. The SBC supports an enhanced EU-NATO relationship, and Portugal and the US expressed their hope for a new EU-NATO Joint Declaration as soon as possible. The SBC welcomes a stronger and more capable European defense, complementary to NATO, and supports the fullest possible U.S. involvement in European defense initiatives. It looks forward to the upcoming EU Strategic Compass and praised the launch of the United States-European Union dialogue on security and defense, contributing to a more robust transatlantic bond. The SBC expressed its wish to see negotiations on a U.S.-European Defense Agency Administrative Arrangement concluded as soon as possible.

14. The SBC recognized the contribution of Portugal to the stability of the Euro-Atlantic area and international security, including through a growing engagement in overseas peace missions and operations. Portugal and the United States also acknowledged the strategic strength of the current bilateral defense partnership and encouraged the Atlantic Center to implement its Roadmap.

15.The SBC was briefed on the most recent discussions held at the Technical Commission and Labor Committee meetings and their respective activities to resolve issues of mutual concern at Lajes Airfield.

16. The SBC reiterated the importance it attaches to environmental safety at Lajes. In this regard, the SBC lauded the constructive discussions that took place during the last two meetings of the Technical Commission, and encouraged progress on the environmental sites where a path forward had been identified, underlining the Technical Commission’s role in continuing to track progress on this matter.

17. Both sides welcomed the plans for sites 3003, 5003, 5009 and 5014. The SBC recognized the importance of continued engagement on sites 3001 and 5001 and was encouraged by efforts to reach a common technical understanding. The SBC welcomes, in this regard, the ongoing collaboration between S. Air Force Civil Engineer Center and Portugal’s National Laboratory for Civil Engineering (LNEC), conducting joint fieldwork, exchanging data, reports and technical expertise to ascertain whether there is risk posed by contamination of the aquifers. The SBC expressed its willingness to build on the results of the ongoing scientific and technical work towards a resolution.

18. The SBC welcomed the U. S. Air Force’s recent decision to reassess the area development plan in place at Lajes Air Field.  A district planning process has been proposed that would reassess and potentially transform the facility disposition strategy going forward.

19. Underlining the potential of the Azores with regard to the development of clean, renewable energies, the SBC encouraged further collaboration in the field of energy transition and decarbonization to facilitate the Azores becoming a clean hydrogen production region. Furthermore, the SBC recognized the work already developed by Fulbright and FLAD with the Azores, and recommended strengthening these partnerships. The SBC also acknowledged the contacts already established with several American colleges and universities, encouraging their cooperation with the University of the Azores through the mobility of students, professors and researchers.

20. Finally, the SBC heard debriefs on the bilateral committees of Science, Technology, Energy and Environment (STEE), Justice and Home Affairs (JHA), and Trade and Investment (TIC).

21. The STEE Committee held a fruitful discussion on Atlantic research, explored possibilities for triangular cooperation with African nations, and had an exchange of views on space, renewable energies, artificial intelligence and smart cities. The SBC lauded the joint effort of both countries to reinvigorate academic and research and development cooperation for the current year, which is on track to recover after a steep decrease of academic exchange activities due to the COVID-19 pandemic.

23. The Trade and Investment Committee held fruitful exchanges on bilateral trade and investment, noting bilateral trade increased this year (versus 2020). The Committee also discussed trade and Investment Promotion Goals and Major Activities/Events for 2022 and brainstormed over a joint initiative for 2022, including organizing a webinar for U.S. companies interested in investing in Europe, the re-tender of the Port of Sines Vasco da Gama terminal and a webinar on the U.S. infrastructure package as well as the Recovery and Resilience funds, to identify specific opportunities for both sides. Finally, both sides provided an update on the US-EU Trade and Technology Council.

24. The SBC decided to hold its next meeting in Washington D.C. in summer2022.