Home Página principal | News & Events | Agreement between the U.S. and Portugal on the Sharing of Seized Property 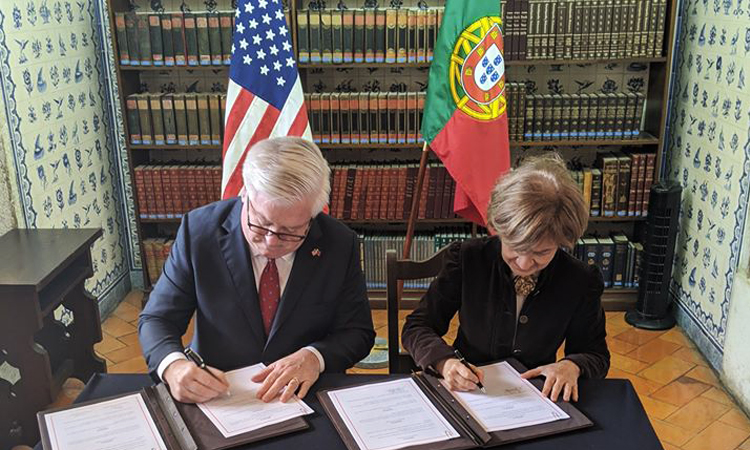 U.S. Ambassador Glass and Secretary of State for Development and Cooperation, Teresa Ribeiro

During the 42nd meeting of the Standing Bilateral Commission between the US and Portugal, which took place on December 17, U.S. Ambassador Glass and Secretary of State for Development and Cooperation, Teresa Ribeiro, signed an agreement between the US Department of Justice and the Portuguese Ministry of Justice entitled, an  “Agreement between the United States of America and the Portuguese Republic on the Sharing of Seized Property or Equivalent Value, ”

This new agreement creates a permanent mechanism for the two countries to, when appropriate, share the proceeds of property seized following joint operations and investigations. Regarding the agreement, Ambassador Glass emphasized, “The US and Portugal are stronger and safer when we work together. This agreement not only serves to strengthen cooperation between the Portuguese and American law enforcement agencies, but also helps to ensure that ill-gotten gains can be reinvested in both of our societies.”

Portugal and the US have a long history of law enforcement cooperation. In 2019 alone, Portuguese and American authorities, working bilaterally and through the Center for Analysis and Operations against Maritime Drug Trafficking (MAOC-N), have collaborated in interdicting nearly 30 tons of illegal narcotics crossing the Atlantic.  Earlier this year, Ambassador Glass also presided over a ceremony honoring Portuguese Authority prosecutors for their collaboration and results, achieved with Homeland Security Investigation (HSI), in investigations involving the law about Corrupt Practices Abroad. Currently, the Regional Security Office in Lisbon has a case, with the Portuguese Judicial Police, involving the sharing of information related to members of organized criminal organizations in Portugal.

While there are already Mutual Legal Assistance Treaties between the US and the European Union, both the US and Portuguese security forces agree that a specific agreement on bilateral funding will be beneficial for both countries.