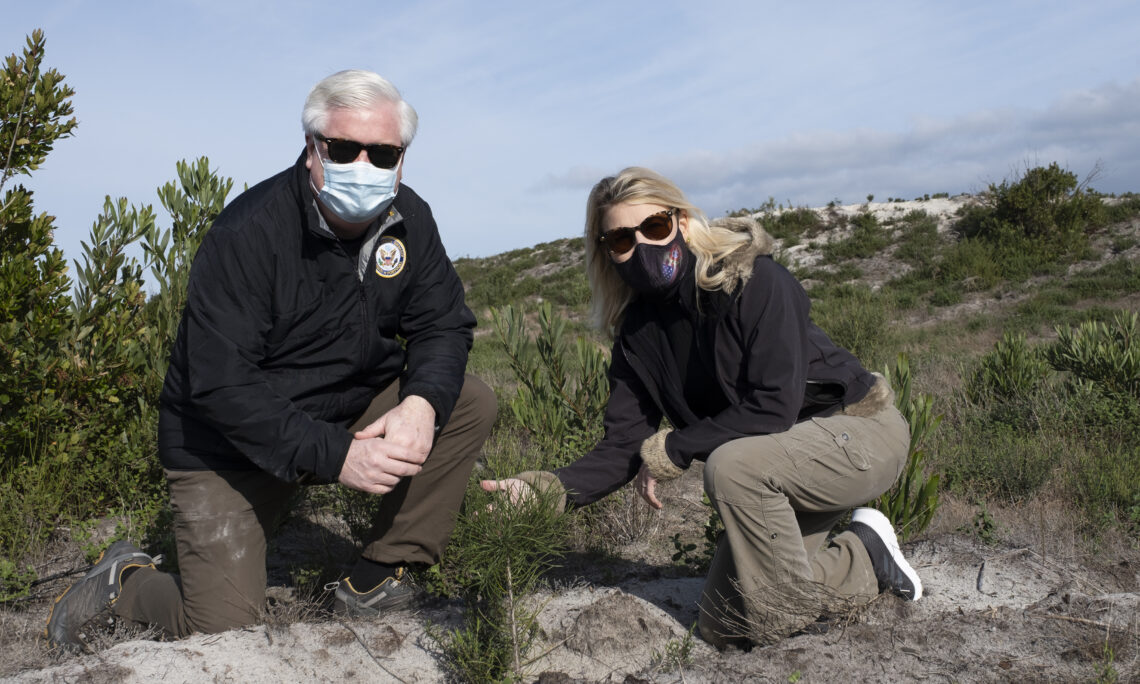 To underscore their commitment to working side-by-side with Portuguese partners to solve shared challenges, Ambassador Glass and Mrs. Glass returned to the U.S.-Portugal Friendship Forest in the Pinhal de Leiria in December 2020 to plant the last of 15,742 trees and unveil a dedication stone, commemorating a two-year+ effort to promote closer cooperation on economic and environmental issues through the Misson’s #ReforestationNation campaign.

This reforestation campaign aligns with the spirit of President Trump’s 2020 announcement that the United States would join World Economic Forum’s One Trillion Trees Initiative, an ambitious global effort to grow and conserve one trillion trees worldwide by 2030.

The #ReforestationNation campaign included the generous support of the U.S. government, private donors, and Quercus in Portugal – a total of more than 40 partners from both sides of the Atlantic.  A special thanks to the Foreign Agricultural Service, U.S. Forest Service, Luso-American Development Foundation, the U.S.-Portugal Fulbright Commission, the Institute for Nature Conservation and Forests (ICNF), the City Halls of Marinha Grande and Leiria, and the broad array of schools and NGOs who offered their support.

Through the interagency working group, Embassy Lisbon was able to learn from different stakeholders about the challenges and opportunities to support reforestation efforts in Portugal.  Over the next year, they worked closely with partner organizations such as the Luso-American Development Foundation (FLAD) and the U.S.-Portugal Fulbright Commission, as well as the U.S. Department of Agriculture’s Forest Service (USFS), to support the visit of technical experts to discuss topics including burned area recovery, fire meteorology, and fire risk communication.

Building on the knowledge and contacts developed during the campaign, the U.S. Embassy culminated its reforestation initiative with a grand community event, FestVerde (“Green Festival”).  The event featured a successful fundraising campaign with NGO and private sector partners; more than 100 volunteers including exchange alumni, Embassy staff, and local students; and interactive workshops and eco-friendly vendors.  At the event, the Ambassador announced the establishment of the first U.S.-Portugal Friendship Forest and the donation of 15,000 trees to an area ravaged by forest fires.

Embassy Lisbon’s initiative highlights the significant impact that collaborative models of engagement can bring to U.S. diplomatic efforts and builds on their previous experience of using partnerships to strengthen its work.

While almost 40 partners and stakeholders contributed to the success of this strategic, two-year effort, key partners contributed in many different ways.  Environmental organizations and NGOs provided insight on challenges to current reforestation efforts in Portugal, while private sector companies and community organizations invested in the donated trees for the social media campaign and those that were planted in the U.S.-Portugal Friendship Forest.  Various partners volunteered and planted trees during the FestVerde event, including local schools and universities who also pitched in by hosting American speakers and experts.  The Embassy’s principal partner, Quercus, organized the logistics of the community tree planting and maintenance, obtained necessary permits, and provided fundraising and promotional support.