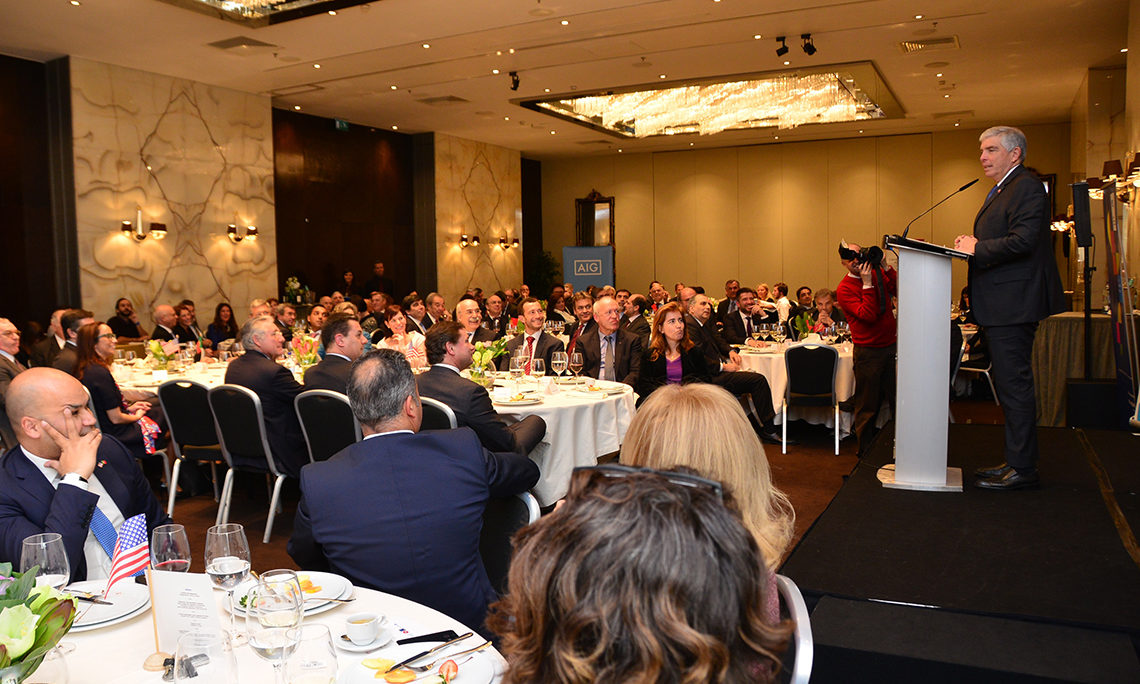 Amb. Sherman at the American Club Lisbon delivering a speech.

U.S. Ambassador to Portugal Robert Sherman bid an official farewell to Portugal on January 13 in a lunch-conference organized by the American Chamber of Commerce in Portugal, the Portugal-United States Friendship Association, and the American Club. The theme of the conference was “Confidence Restored – A Bright Future for Portugal and the U.S.-Portugal Relationship.”   This was Ambassador Sherman’s last official speech in Portugal prior to the end of his tenure on January 20.

In his speech, he quoted Barack Obama, mentioned Portugal’s recent achievements and the good relations between Portugal and the United States. About 200 guests attended the event including the Ambassador’s “good friend” Minister of Economy Manuel Caldeira Cabral and the Portuguese Secretary of State for Tourism.  Ambassador Sherman highlighted that in his years as Ambassador, he had the privilege of bearing witness to Portugal’s transformation from a country that did not believe in itself and did not believe it could play a role on the world stage to a country that is doing fantastic things in technology, winning the Euro Championship, electing António Guterres as UN Secretary-general and hosting the Web Summit in Lisbon.

Ambassador Sherman leaves a message of hope and optimism for the people of Portugal, saying: “Believe in yourself. If you play together as a team and you believe in yourself, you can accomplish great things like the national team did. Look for others to join with you, believe in your ideas and you will do wonderful things.” Ambassador Sherman added that “In Portugal, I see a country with thriving and growing links across the Atlantic; with energized entrepreneurs; with cutting-edge research; with innovative thinkers developing future-forward solutions to global challenges.” “The other thing I’d like to say to the Portuguese people is: you are the kindest, warmest, most welcoming people I’ve ever encountered anywhere on the earth and I will keep you in my heart forever.”  With regards to President Marcelo Rebelo de Sousa, Ambassador Sherman noted that “I have great faith that the Portuguese President will be a strong voice for Europe.”

In addition to the support of the organizers, The American Chamber of Commerce in Portugal, the Portugal-United States Friendship Association, and the American Club, the event included the sponsorship of EDP, MDS Insure, AIG, United Airlines, e PwC.