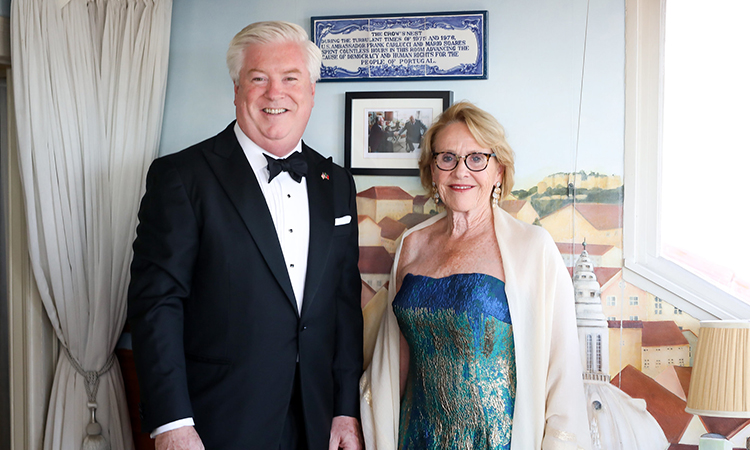 When I arrived in Portugal two years ago, my first stop was at my new home, the official U.S. Ambassador’s Residence. The house is, of course, beautiful and distinguished. But it is more than that. The Ambassador’s Residence also serves as an important symbol of the strength of the U.S.-Portugal relationship, and a constant reminder of the immense responsibility I have been given to serve as a steward of our historic friendship.

As Ambassador, I have had the pleasure of hosting many events at the Residence, and I have learned much from our Portuguese guests about the important role this house in Lapa has played throughout its history. Given the strength of our relationship with Portugal, it stands to reason that many memorable moments have occurred there. Yet as I have reflected more and more, I have come to appreciate, above all others, the unique and important events that took place in the Residence during the Ambassadorship of Frank Carlucci from 1975 to 1978.

During the Verão Quente, Frank Carlucci and Mário Soares met frequently in a tiny room – originally a laundry room – on the top floor of the Residence to exchange ideas on how to ensure that Portugal’s Revolution succeeded in delivering democracy to Portugal.  We all know the critical role that Mario Soares played at that time, and I know that Soares was not alone – there were many others who distinguished themselves during the democratic transition – Ernesto Melo Antunes, Francisco Sá Carneiro, and António Ramalho Eanes, to name just a few.  But it must be said that the main political question of that moment, and much of what was discussed between Carlucci and Soares during those meetings, was whether the Portuguese Socialists could successfully reject radical influences and assure Portugal’s democratic, European future.  It fell to Mário Soares and his leadership to make sure this happened, and thankfully it did.

Fortunately, as well, the United States had placed Frank Carlucci in Portugal during this time.  As a seasoned diplomat, Ambassador Carlucci took the time to get to know Mario Soares and to understand Portuguese society. In doing so, he was able to clearly evaluate the situation and convince Washington to stand with its friend and ally during a turbulent time. His actions represented the best of American diplomacy, and enabled U.S. leaders to provide timely economic assistance and military cooperation to support Portugal’s fledgling democracy. His work provided the foundation for the modern U.S.-Portugal relationship that every U.S. Ambassador since has worked hard to build upon.

44 years after these events, and one year after Frank Carlucci’s passing, it is my great privilege to be able to announce that the U.S. Ambassador’s Residence in Portugal will henceforth be known as Casa Carlucci, in his honor. Casa Carlucci will also be entered into the U.S. Secretary of State’s Register of Culturally Significant Properties, in recognition of its important legacy and that of Ambassador Carlucci.

While the events of 1975 may seem distant, especially given the vibrancy of Portugal’s modern democracy, the example that Frank Carlucci and Mario Soares set decades ago remains vitally important today.  They showed that when our two great democracies work side by side, we are stronger, more prosperous, and more secure.  I, and all the Ambassadors who have lived in Casa Carlucci since, are inheritors of the legacy of friendship and partnership that was fostered on the top floor of that home. It is my sincerest hope that future visits to the Casa Carlucci give people the opportunity to understand that the beauty of the building is matched only by the weight of the history it holds sacred.  And that future U.S. ambassadors commit themselves to preserving that legacy so that Casa Carlucci will continue to be a space for dialogue, diplomacy, and democracy for generations to come.

In honor of Frank Carlucci