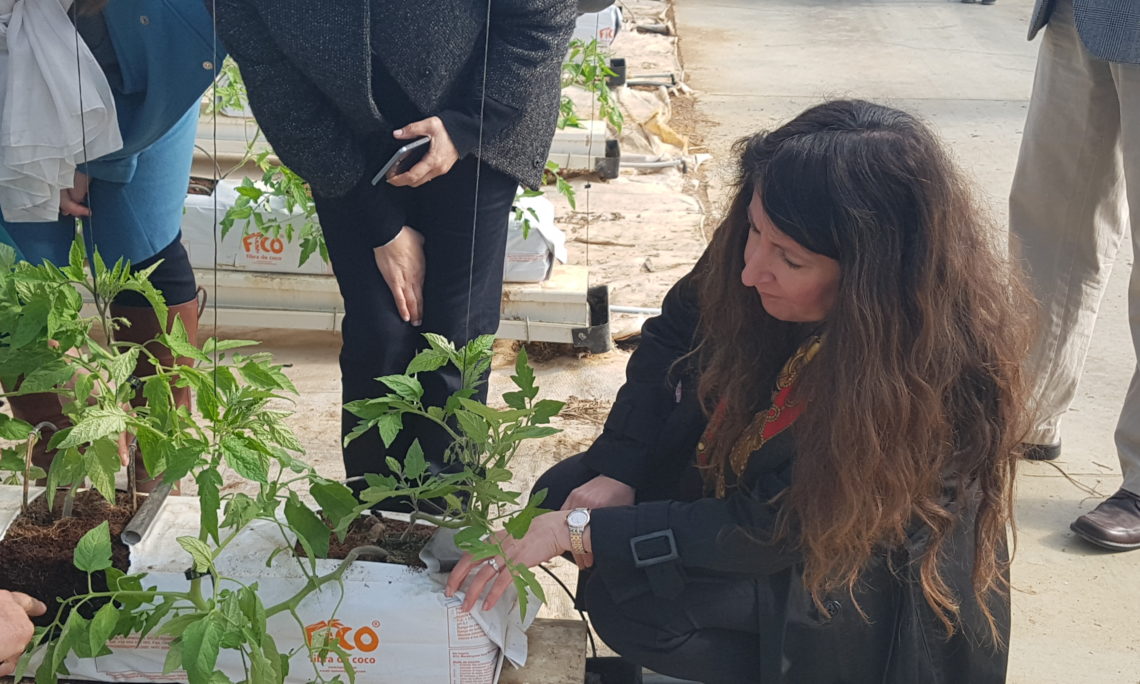 On February 10, Chargé d’Affaires Herro Mustafa, Agricultural Attaché Rachel Bickford, and Acting Political-Economic Counselor Ben Rockwell spent an “Agricultural Day” visiting and meeting with several agricultural partners, businesses, government representatives and stakeholders.  The tour and the resulting meetings allowed Chargé Mustafa and Ms. Bickford to reinforce the already strong U.S.-Portugal bilateral agricultural relations, and to open a dialogue on how we can better collaborate on issues of mutual interest.

The first stop Chargé Mustafa and Ms. Bickford made was to Coopval (Agricultural Cooperative of Fruit of Cadaval) in Cadaval, Torres Vedras.  There they met with Mr. Aristides Sécio, Chairman of the Assembly of Coopval, attended a presentation about Coopval’s business and visited its packing house for Rocha and Morettini pears, apples, and other fruit.  Chargé Mustafa recognized the years of hard work that has gone into meeting U.S. plant health requirements to export pera rocha to the United States, and looked forward to the first shipments once the U.S. order is signed.

Chargé d’Affaires Herro Mustafa and Agricultural Attaché Rachel Bickford visited Vítor Santos & Fátima Santos ACE in Torres Vedras and met with the two owners of the modern large-scale hydroponic tomato and lettuce production facility.  Ms. Mustafa and Ms. Bickford took this opportunity to understand the challenges faced by one of Portugal’s most important agricultural sectors.    Portuguese farmers produced almost $9.3 million worth of fruit and vegetables in 2015 of which $2.2 million were exported to the U.S.

Also as part of Agricultural Day, Chargé Mustafa and Attaché Rachel Bickford were accompanied all day by the Ministry of Agriculture, Forestry and Rural Development’s Director General of the Office for Planning, Policies and Administration (GPP) Mr. Eduardo Diniz, Director for European and International Affairs (GPP) Mrs. Margarida Vaz and Assistant Director, Directorate-General for Food and Veterinary Issues (DGAV) Ms. Ana Paula Carvalho.  The group discussed opportunities and challenges in U.S.-Portugal agricultural trade, and agreed to continue frequent cooperation to improve trade for both parties.

To conclude the day, Chargé Mustafa and Ms. Bickford visited the Interprofessional Association of the Portuguese Wine Industry and ViniPortugal, the entity managing the brand “Wines of Portugal.”  They were received by the President of Wine and Vineyard Institute (IVV) Mr. Frederico Falcão and the CMO of ViniPortugal Mr. Nuno Vale.  As Portugal is the fifth largest wine producer in the EU after Italy, France, Spain and Germany, ViniPortugal organized a wine tasting for Chargé Musfata and Ms. Bickford in order to reinforce U.S.-Portugal cooperation in the wine trade.   Chargé Mustafa was pleased to hear that the United States has become the largest market overall for Portuguese table wines.  Portuguese wines continue to build a strong following in the United States, wines such as vinho verde enjoy trademark protection under the U.S. system.

The U.S.-Portugal agricultural relationship is strong, and bilateral food and agricultural trade averages almost $500 million annually over the past five years.  U.S. farmers export over $250 million annually, and U.S. grown grains are a major source of feed for Portugal’s livestock.  Portugal exports over $100 million a year to the United States as well in high-value products like wines and seafood, as well as processed forest products such as plywood.  Our agricultural trade relationship is strong, and will only continue to grow as American farmers contribute to Portuguese agriculture and American consumers continue to discover Portugal’s excellent food and wine.