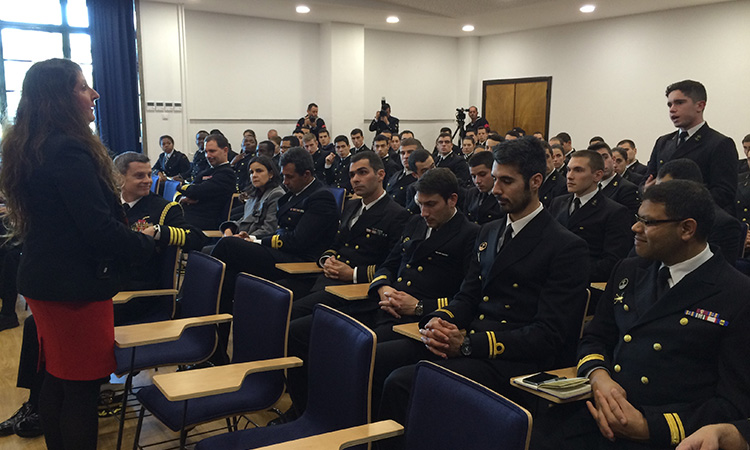 Chargé d’Affaires Herro Mustafa visited the Naval Academy in Alfeite on February 8, met with the Rear Admiral António Manuel Henriques Gomes, the Superintendent of the Academy, and spoke to an audience of approximately 100 attendees on leadership. Following the presentation, the cadets and Ms. Mustafa engaged in question and answers on leadership and current U.S. policies and presented an award to Pedro Vale Marques, the Academy’s top fourth year cadet.

In addition to approximately 80 third and fourth year Portuguese cadets, the audience included some international students from Angola, Cape Verde and Mozambique, as well as professors and staff of the Academy.

Chargé Mustafa also took the opportunity to pay an office call on Rear Admiral António Manuel Henriques Gomes and members of his staff, during which they discussed ongoing and future cooperation, including exchanges of students, professors, and curriculum.  The Portuguese and U.S. Naval academies completed their first six-month student exchange in 2016, and the program continues in 2017 with two Portuguese cadets and two American midshipmen scheduled for an exchange in the Fall.  The engagement on February 8th was another outward sign of the vibrant partnership between the Portuguese and U.S. Navies.

The Portuguese Naval Academy was founded in 1782, and currently has approximately 350 students and 200 faculty and staff, military and civilian.  The Academy offers a five-year program where students graduate with a Master of Science degree in one of five academic programs with curricula tailored to their future assignments as naval officers: line officers, Marines, naval engineering (mechanics), naval engineering (weapons and electronics), and naval administration.