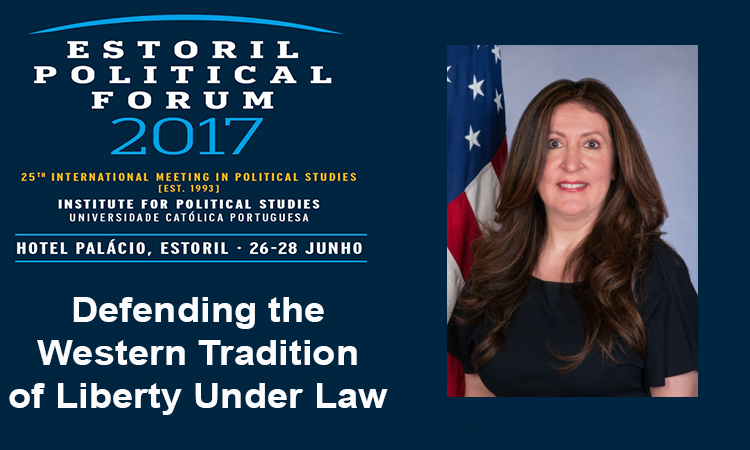 On June 28, Chargé d’Affaires Herro Mustafa attended the 2017 Estoril Political Forum, which celebrated the 25th anniversary of the International Meeting in Political Studies and the 20th anniversary of the Catholic University’s Institute for Political Studies.  The Chargé was honored to chair the George Washington Memorial Lunch at the conference, during which she was warmly introduced by the esteemed João Carlos Espada, director of IEP-UCP.  Espada highlighted both the career accolades and life experiences of the Chargé, and how both profiles on her life have enabled her to become a respected diplomat and honored partner in defending U.S.-European values.

The Chargé then offered kind remarks about the conference and introduced speaker James H. Nichols of Claremont Mckenna College in Claremont, California.  Before introducing the keynote speaker, she noted that the theme of this year’s Estoril Political Forum,  Defending the Western Tradition of Liberty Under Law, “could not be more timely,” as perceptions of a “weakening of the West” have continued to grow in recent times.   The Chargé also made it a point to highlight the importance of America’s relationship with Europe in two key areas: transatlantic trade and NATO, noting that Europe remains one of America’s most important global partners.  Lastly, she underscored the “critical importance of preserving liberty and democracy,” adding that the freedom of speech and ability to peaceably assemble continue to be some of the most powerful rights that Americans have retained since the Constitution was written by our Founding Fathers.

The Chargé’s introduction of James H. Nichols’ lecture highlighted how his work “lends perspective to a consideration of liberty, law, and other distinctive features of the American Constitution” by placing them against the backdrop of the Roman example.