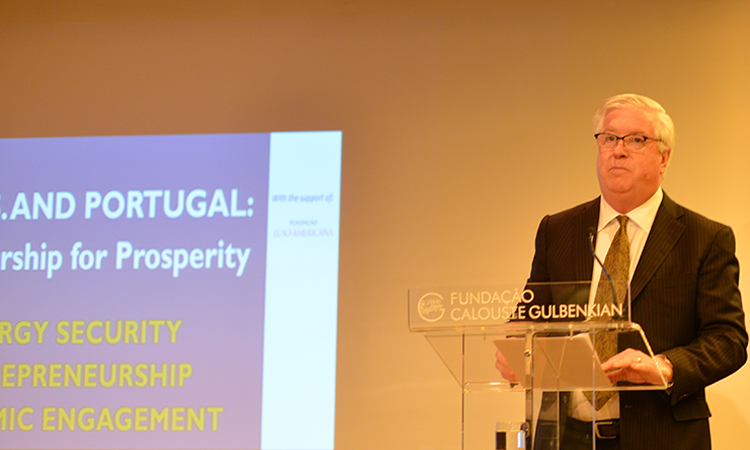 Ambassador Glass speaking at the Conference "The U.S. and Portugal: a partnership for prosperity" at Gulbenkian

On June 4, 2018, the U.S. Embassy in Lisbon, with support from the Luso-American Development Foundation (FLAD), hosted the conference “The United States and Portugal:  A Partnership for Prosperity – Energy Security, Entrepreneurship, and Economic Engagement” at the Gulbenkian foundation in Lisbon. The one-day conference was opened with remarks by U.S. Ambassador George Glass, Prime Minister António Costa and the Minister of the Sea, Ana Paula Vitorino. Prime Minister Costa’s opening message was that Portugal could be a “second home” for U.S. investors since it is “the first North American gateway to the European Union of the future”. Energy security in Europe and liquefied natural gas (LNG), the relationship between companies from both countries and innovation and technology were the subject of debate at the meeting, in which the Minister of the Sea, Ana Paula Vitorino, delivered remarks about “LNG and Energy Security.  There were also keynote addresses by Dr. Mae Jemison, the first African American female astronaut, and David Neeleman of TAP Air Portugal.  The conference concluded with closing remarks from the President of the Republic, Marcelo Rebelo de Sousa.

During the conference there was a round table about “The Future of LNG and Energy Security in Europe”, which included the Acting Special Envoy and Coordinator for International Energy Affairs, John McCarrick, Regional Secretary for Transportation of the Azores Ana Cunha, REN COO João Faria Conceição, and Galp COO Pedro Ricardo. “Connecting our companies and our capital” was the theme of another debate with the speakers Kay Koplovitz,  Springboard chairman, and Alla Weinstein, founder and CEO of Trident Winds.

Photos of the conference at Gulbenkian