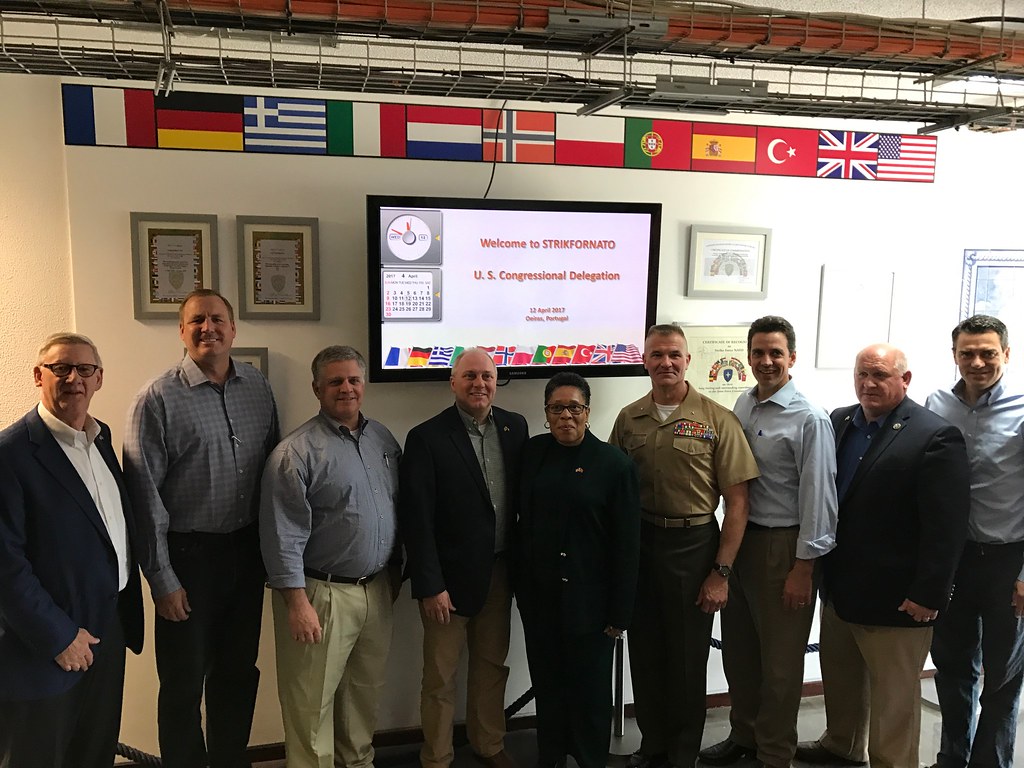 Republican Representative Steve Scalise (R-LA) led a bipartisan delegation of nine U.S. members of the House of Representatives on a visit to Portugal on April 10-12.  The delegation met with Embassy staff, parliamentary leaders, top government and private sector figures, and NATO personnel to discuss U.S.-Portugal cooperation on mostly energy but also defense and security issues.  This included visits to the U.S. Embassy, parliament, the NATO Naval Striking and Support Forces (STRIKFORNATO) in Oeiras, and a roundtable discussion on energy co-organized and sponsored by the Luso-American Foundation for Development (FLAD).

U.S. Embassy Chargé d’Affaires Herro Mustafa explained that “They’re here to look at energy security and ways in which the U.S. and Portugal can work more closely together on energy security throughout Europe.” Representative Steve Scalise praised the cooperation between the two countries in NATO to fight terrorism: “Portugal has recommitted themselves to NATO as well and I’m sure we’ll continue to step up and make sure that all of our countries — U.S., Portugal and all the other NATO countries — are working together to go combat terrorism where it is.”

During a visit by the delegation to Parliament, Steve Scalise conveyed “strong support for the relationship between the United States and Portugal.”  He said that “The U.S. Vice-President Mike Pence, on behalf of President Trump, asked me to convey the President’s strong commitment to our relationship with Portugal and our strong relationship with NATO.”  He added that “With so many problems in the world, we have a strong partner like Portugal that continues to work with us to keep our two countries safe, but also to look at the world.” Democratic Representative Cedric Richmond also emphasized the importance of the bilateral relationship. “This is long-standing relationship, which we consider very seriously and it is part of our job to come to Lisbon and reaffirm this,” he said.

On the delegation’s visit to the Parliament, President of the Assembly of the Republic Eduardo Ferro Rodrigues also noted, “Our bilateral relations are very close and friendly. The U.S. continues to be our main strategic ally,” he said, stressing that NATO and the transatlantic link “are at the heart of Portuguese foreign policy, in the defense area.”  In addition, the U.S. is among Portugal’s “main trading partners,” he said, adding that “economic growth has returned” after a period of crisis.