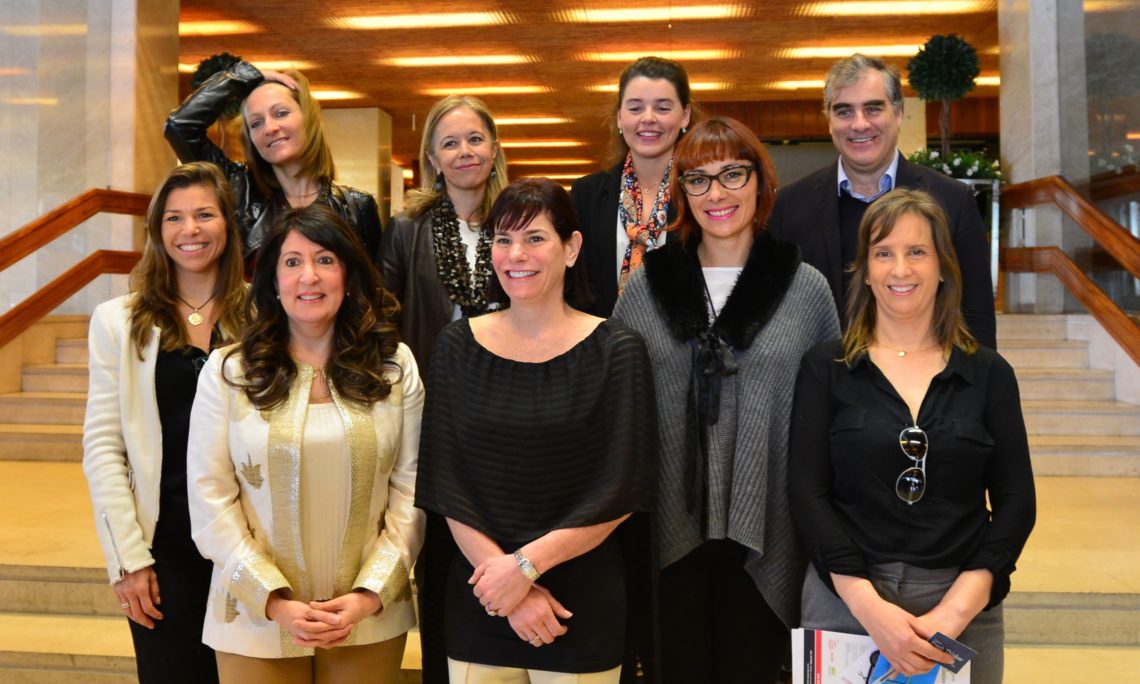 In recognition of International Women’s Day on March 8, the Embassy partnered with the Luso-American Foundation for Development (FLAD) to organize two days of Connect to Success (C2S) workshops for women entrepreneurs and women business owners that focused on developing key business skills.

On March 10, the Embassy and FLAD offered a workshop on “How to Pitch to Investors”, in collaboration with Tim Vieira, a well-known business investor, and Link to Leaders, an online platform/directory aimed at establishing connections between start-ups, businesses and business angels.  Over 100 women entrepreneurs attended the workshop at Tim’s Garage in Cascais and learned how to pitch their products and services to potential investors, specifically to business angels.

During the workshop, Pedro Janela, WYgroup CEO, presented on “The Art of Pitching and Entrepreneurial Funding”, sharing tips and best practices on how to prepare and present proposals for investment.  Following the workshops, women entrepreneurs  participated in a “Pitching Competition”, facilitated by three business angels Tim Vieira, Pedro Janela and also Ricardo Luz,  Executive Director of the Development Finance Institution (IFD).  The women entrepreneurs practiced their newly honed business pitch to that will be present.  Two winners received the opportunity for individual counseling sessions by business angels Tim Vieira and WYgroup.

FLAD Administrator Jorge Gabriel spoke at the opening of the workshop, noting that “Entrepreneurship is by definition a private initiative and the funding of projects should be guaranteed by private investors and not government. What the government can do is create the conditions to make life easier for investors and entrepreneurs which will, ultimately, give the business better chances to thrive.” He also noted that “It is crucial for an entrepreneur to understand that a good idea does not mean a successful business; and that even when a good idea becomes a good business, it takes a great deal of resilience and will to keep going forward, especially when there is a loss or a failure. An entrepreneur has to be bulletproof, has to understand the difficulties inherent to the creation of the business and have an enormous capacity of persuasion when talking to investors. That is the reason why FLAD believes these workshops can be of great value to the C2S entrepreneurs and the future success of their businesses.”  Speaking at the closing networking session of the workshop, the Embassy’s Public Affairs Officer Mark Pannell thanked the event organizers Link to Leaders, sponsor FLAD, the business angels and workshop facilitators, and all the participants.  He reaffirmed the Embassy’s commitment to Connect to Success and noted that “the Embassy is committed to women and gender rights and is actively engaged on several fronts to create greater opportunity and to raise awareness.”

On March 11, the Embassy and FLAD partnered with Católica Lisbon School of Business and Economics, to bring a full day of Connect to Success workshops to approximately 300 women entrepreneurs and Católica alumni and students.  The workshops included three separate sessions on 15 different subjects, including “Negotiation Best Practices,” “Digital Marketing and Social Networks”, “Recruitment Strategies,” and “Time and People Management”.

At the opening session, Católica University’s rector Isabel Capeloa Gil welcomed the large attending audience and discussed economic inequities for women in Portugal.  FLAD’s Connect to Success Program Coordinator Karolina Vasconcelos e Sá spoke, noting that “Connect to Success had returned to Católica following the first set of very successful workshops conducted two years prior.”   The Embassy’s Chargé d’Affaires Herro Mustafa also spoke at the opening, saying “As we commemorate International Woman’s Day, it is appropriate to assess where we are and where we are going on women’s issues.  We see that we have still much to do to improve on the realities faced by women and girls in our societies.”  Kim Sawyer also noted that she was “very happy to return to Portugal as Connect to Success’s Executive Director for the two consecutive days of workshops we organized for our women entrepreneurs in recognition of International Women’s Day! The workshop themes were wide-ranging and focused on providing our C2S entrepreneurs with new tangible business skills such as how to pitch their business to investors, developing a business plan, and finances; but also on equally crucial soft skills such as leadership and developing self-confidence.”

Both days of workshops concluded with networking sessions at the end of the day, during which participants engaged in networking and improved their business connections.