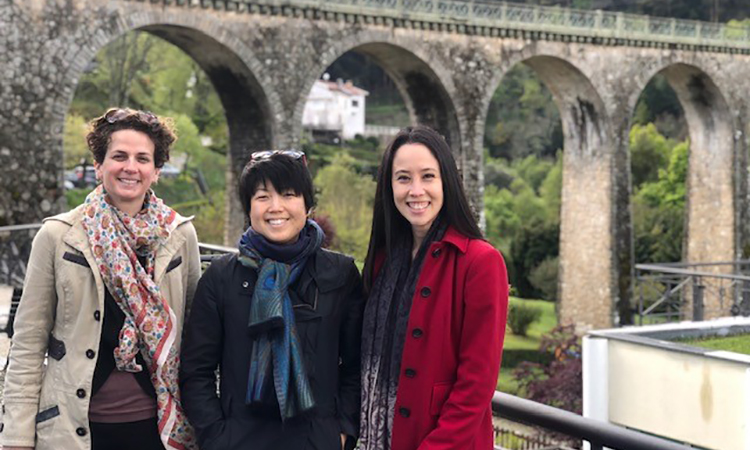 The U.S. Embassy sponsored the talented American ensemble Delphi Trio to do a series of concerts in Portugal April 6-10.  The Trio had highly successful concerts in Leiria, Viseu, and Vila Real as part of the Embassy’s #ReforestationNation Tour in celebration of Earth Day on April 22.  The objective of the tour was to call attention to the important issue of reforestation, express our sympathies and solidarity with communities in recovery, and celebrate the U.S. Portugal friendship.  During their visit to the interior, the Trio did cultural tours, visited reforestation NGOs, visited local music conservatories, and shared their stories about the resilience of communities affected by wildfires in California.  They also performed in Beja during the Festival Terras Sem Sombra, as the United States is the 2019 Festival’s Nation of Honor.  At the Festival, the Trio performed in front of a standing room audience of more than 400 spectators in the historic Pousada de São Francisco.  At the concerts, the Delphi Trio’s repertoire included: Piano Trio No. 1 by American composer Pierre Jalbert and Piano Trio No. 2 by Franz Schubert.

Praised for “…spot-on ensemble playing and a beautifully blended sound…” (San Francisco Classical Voice) and “…rich, committed string tone, dazzling pianism, rhythmic flexibility, and risky tempi…” (Sarasota Herald Tribune) the Delphi Trio has become a powerfully eloquent voice in the world of chamber music.  Prizewinners of the 2015 Orlando Concours in the Netherlands, the Delphi Trio has performed in Germany, the Netherlands, Canada, and across the United States, including the Smithsonian American Art Museum, the Great Lakes Chamber Music Festival, and WFMT Studios Chicago.

The Delphi Trio believes chamber music is an ideal model for education.  Delphi is committed to supporting young artists as they begin their careers and has established their Emerging Artist Program to collaborate with collegiate students in their first professional chamber music concert.  The Trio also curates the Practice Project, a social media group dedicated to fostering community, openness, and vulnerability among both professional and amateur artists.  Delphi Trio is Liana Bérubé (violin), Michelle Kwon (cello), and Elizabeth Schumann (piano).