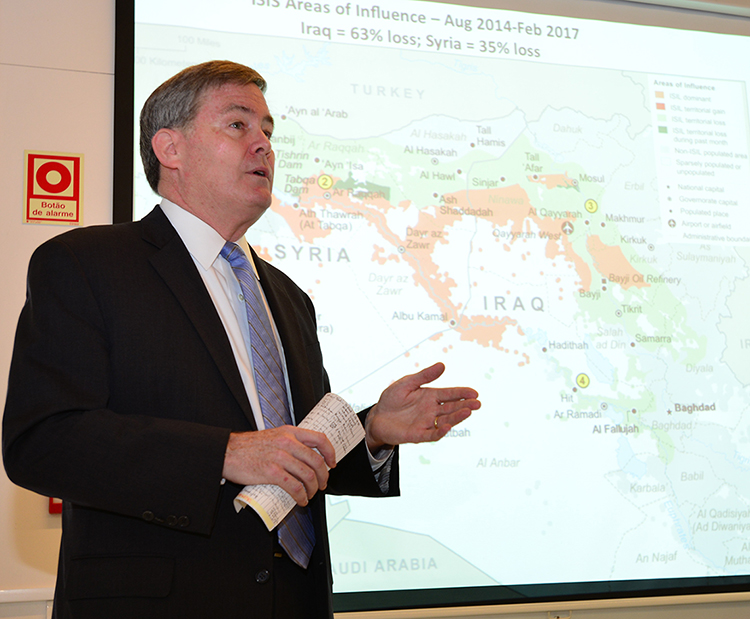 Deputy Special Presidential Envoy for the Global Coalition to Defeat ISIS, LTG (ret) Terry Wolff visited Lisbon on May 14-16, 2017, and met with government officials, and delivered remarks at two different events on the Coalition’s efforts to defeat ISIS.

At Georgetown Club Portugal’s Annual Meeting on May 15, jointly organized with the U.S. Embassy and the Luso-American Development Foundation (FLAD), LTG Terry Wolff and Portugal’s former Minister of Defense Antonio Vitorino delivered keynote remarks on “U.S.-EU Collaboration to Defeat ISIS and Transnational Threats.”  Chargé d’Affaires Herro Mustafa, FLAD President Vasco Rato and Georgetown Club Portugal President Paula Redondo Pereira provided opening remarks.  During his presentation, LTG Wolff provided the audience of approximately 70 government, private sector, diplomatic, military attachés, think tank and media participants with an overview of the global fight against Daesh, delving into the challenge posed by the flow of foreign terrorist fighters (FTF) and the work of the Global Coalition to Counter ISIS.  The event was followed by a moderated discussion with António Vitorino, questions and answers from the audience, and interviews with local media outlets.

Also on May 15, DSPE Wolff also met with several Portuguese government officials to discuss the Global Coalition to Defeat ISIS, including with the Chief of Armed Forces (ChoD) General Artur Neves Pina Monteiro.  At the Ministry of Foreign Affairs, DSPE Wolff met with Luis Cabaço, the Deputy Political Director of Defense, Virginia Pina, Deputy Political Director for the Middle East, and João Pedro Antunes, Deputy Political Director for the United States, Community of Portuguese Language Countries (CPLP) and Sub-Saharan Africa.  DSPE Wolff underscored that defeating ISIS is a top priority for the Trump administration.  He also commented that Portugal has been successful in controlling the return of foreign terrorist fighters: “This is a matter of great concern for us and the challenge is to know what different countries are prepared to do in that respect.”

On May 16, DSPE Wolff delivered a presentation entitled “U.S.-European  Collaboration to Defeat ISIS and Transnational Threats”‎ to approximately 90 students, faculty, city councilpersons, etc. at the Faculty of Social Sciences, Education and Administration (FCSEA) of Lusófona University.