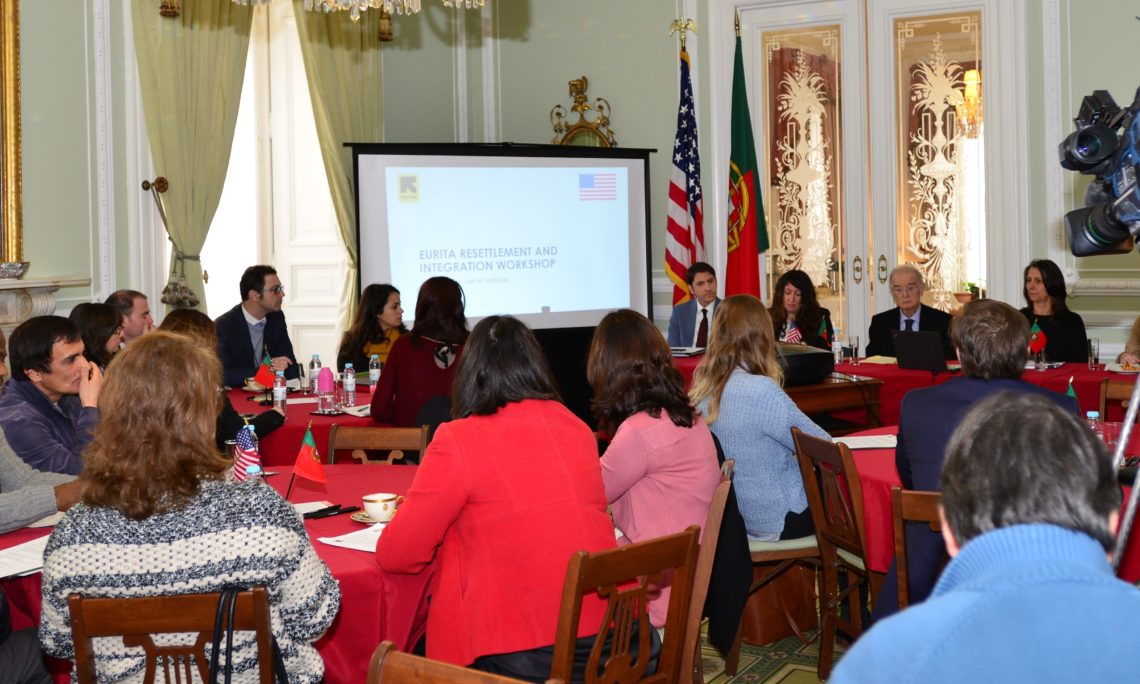 In cooperation with the International Rescue Committee (IRC), the U.S. Embassy held a three-day workshop on refugee resettlement and integration in Lisbon on February 21-23, 2017 at the official residence.  This was the first of ten workshops to be held in Europe, part of the European Resettlement and Integration Technical Assistance (EURITA) funded by the U.S. Department of State and implemented by the IRC.

The workshop brought together a diverse group of 35 participants for three full days, including stakeholders that represent the full spectrum of institutions working on refugee integration – national government, local government, NGOs, volunteer groups, faith-based organizations.  The workshop was facilitated by U.S. resettlement and integration practitioners from the IRC, who tailored the program to Portugal’s specific context and requested needs, based on individualized assessments from participants and feedback from the U.S. Embassy. Workshop participants created measurable action plans and tools designed to enhance the development and implementation of resettlement and integration strategies in their own communities.

On February 21, Chargé d’Affaires Herro Mustafa and former President of Portugal Jorge Sampaio opened the workshop.  In her remarks, Chargé Herro Mustafa praised Dr. Sampaio for the tremendous work that his organization, the Global Platform for Syrian Students, has accomplished.  She also emphasized that “Portugal has a proven track record of integration and inclusion, whether with migrants from the Lusophone world who came in the 1970s, 80s and 90s, or the more recent wave of refugees fleeing the Middle East and Africa” and added that “Portugal continues to be a beacon of hope and a land of opportunity for those in need of hope and opportunity.  As we have seen over the last year, Portugal continues to do so with open arms and a warm heart.”

On the initiative, Dr. Sampaio mentioned in his remarks that “Integrating refugees into our societies includes building open, inclusive and tolerant societies, and this can be extremely difficult. We appreciate the U.S. Embassy’s initiative to organize this workshop. Such initiatives are important to ensure we are doing all we can on this.”

On February 23, Chargé d’Affaires Herro Mustafa and European Parliamentarian Ana Gomes provided remarks at the closing session of the workshop.  Chargé Mustafa thanked the IRC and all the participants for their input, sharing of best practices and ideas for future collaboration, and underscored that “the United States stands committed to working with Portugal on refugee issues.”  Parliamentarian Ana Gomes complimented the Embassy on its initiative and said that “Portugal and the United States are working together to keep refugees safe and integrate them into Portuguese society.  We should deepen our synergy and cooperation in this area, as it is both our histories to do so.”

The EURITA initiative shares U.S. experiences in refugee resettlement and integration with practitioners in European countries. Its goal is to work collaboratively with countries seeking technical assistance on refugee integration to identify and learn from strategies that have been successful in U.S. communities and could be applicable in the European context.