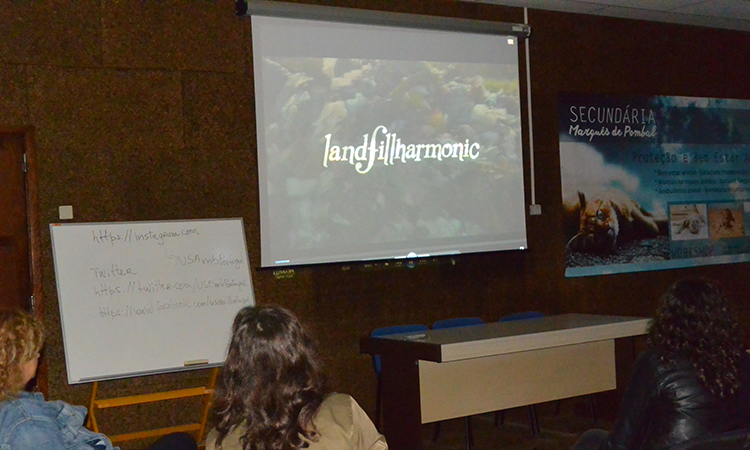 On May 8, 2019 an Embassy Representative visited Escola Secundária Marquês de Pombal, in Lisbon, to engage with students from Escola do Conservatório de Música.  The purpose of this visit was to show a film related to music and of interest to a group of 8th and 10th graders.  Approximately 60 students and respective teachers watched the film, which centered the transformative power of music and highlights two vital issues of our times: poverty and waste pollution.

The film in question is “Landfill Harmonic” which follows the Recycled Orchestra of Cateura, a Paraguayan youth orchestra that plays instruments made entirely out of garbage. When their story goes viral, the orchestra is catapulted into the global spotlight. Under the guidance of idealistic music director Favio Chavez, the orchestra must navigate a strange new world of arenas and sold-out concerts. However, when the largest flood in over 20 years devastates their community, Favio must find a way to keep the orchestra intact and provide a source of hope for their town. The film is a testimony to the transformative power of music and the resilience of the human spirit and was really inspiring to this group of students.

This film screening was supported by a two-year partnership between the Embassy and the American Film Showcase program.  The American Film Showcase brings award-winning contemporary American documentaries, independent fiction films, and documentary know-how to audiences around the world, offering a view of American society and culture as seen by independent filmmakers.  Funded by a grant from the State Department’s Bureau of Educational and Cultural Affairs (ECA) and produced by the University of Southern California School of Cinematic Arts (SCA), the Showcase highlights the value of film in fostering understanding and cooperation, dialogue and debate.