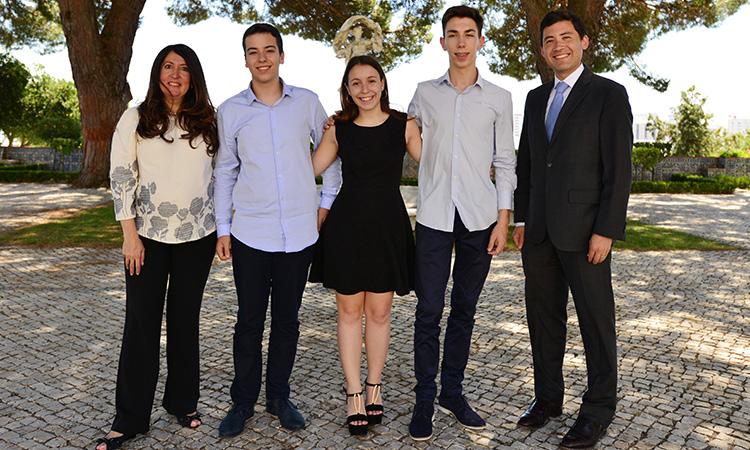 As part of their prize, Dinis Pereira (17), Leandro Macedo (16) and Natacha Macedo (18), winners of Junior Achievement Portugal’s Company of the Year Challenge, met with Chargé d ‘Affaires Herro Mustafa and Public Affairs Officer Todd Miyahira for lunch at the Embassy. The three second-year students in the Multimedia Professional Course, at the Martins Sarmento Secondary School in Guimarães, detailed their experiences creating a company from scratch, winning the nationwide challenge, and competing in the European-wide competition in Brussels earlier this month.

The company they created is named Beauto (“be autonomous”) and their product is a portable pill storage box, divided in to sections, with an accompanying phone app that has programmable alarms to notify users when medication needs to be taken. Within the company, each student was responsible for different departments and assumed various roles according to their unique aptitudes and personalities.

The Company Program teaches secondary school students how to develop a business idea and take it from concept to reality. Students simulate creating their own company, electing a board of directors, raising capital, and marketing their products/services. At the end of the school year, they present a report and accounts to their shareholders and are evaluated by Junior Achievement juries. The best 24 five-member teams from Portugal were selected to participate at the National Competition, which took place on June 2nd, 2017 at the Museu do Oriente. Dinis, Leandro and Natacha’s company Beauto earned the top spot in the nationwide competition which afforded them the chance to compete in the European-wide challenge held in Brussels July 11-13th. 200 students from 35 countries participated in the international competition.

The first national Company Program competition in Europe was held in 1989 and since that date has been implemented in 41 countries and reached roughly 3.5 million European students. The Program arrived in Portugal in 2007 and about 37,000 students have participated in the competition in the past decade.