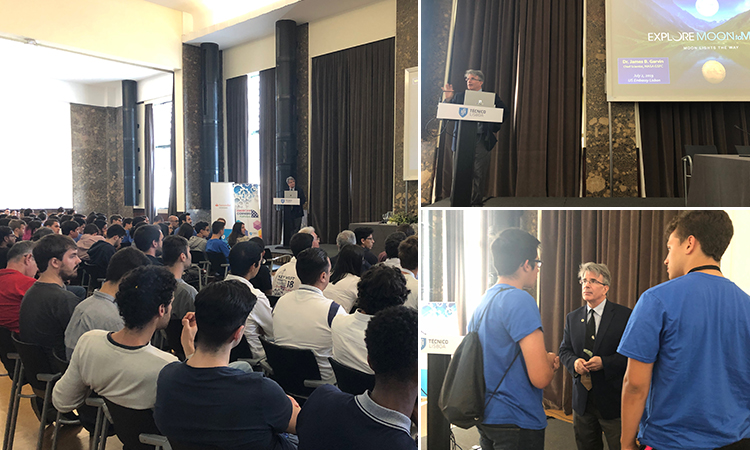 Dr. James B. Garvin, NASA’s Goddard Space Flight Center Chief Scientist, travelled to Portugal to participate in the Global Exploration Summit (GLEX) in Portugal.  In addition to his participation in the summit, he also delivered his presentation, entitled “Space: Enabling our Forever Frontier,” to more than 150 secondary school students attending summer schools, as well as university students of sciences and engineering, and professors/researchers at the Instituto Superior Técnico (IST).

The Global Exploration Summit in Portugal (GLEX, July 3-5, 2019 – http://www.glexsummit.com/contents/program) is bringing together the world’s leading explorers and scientists for a gathering, where they will share cutting-edge technology and innovations towards the next frontier in the future of exploration. The Explorers Club is an organization founded around 100 years ago in New York.  It has 33 delegations around the world to promote scientific exploration on land, air, oceans, and space.

Over the last years, in partnership with our American Corners, the U.S. Embassy has hosted multiple science and space exploration related experts, including NASA astronauts.  Over the last eight years, it has supported and brought outstanding American speakers and experts university campuses and summer school audiences, including:

These programs have been extremely successful reaching thousands of young Portuguese students, researchers, and innovators.