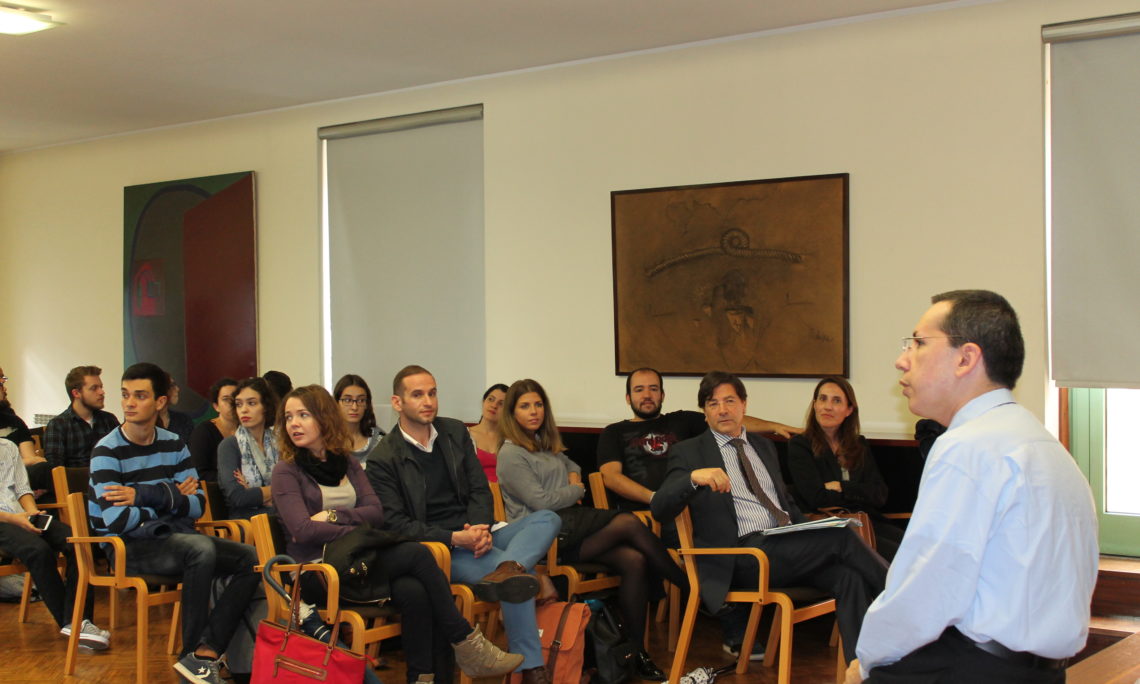 Nicholas Kralev at the University of Porto

As part of our overall elections outreach, the Embassy brought Nicholas Kralev to Portugal from November 2-10, to speak on the impact of the American elections, both presidential and congressional, on U.S. foreign policy.

“Nobody really knows, not even Trump himself, knows what will happen”, according to American foreign policy expert, Nicholas Kralev. Adding that, “life is very different in the White House. Trump will find that there are many restrictions on what a President can do.”

During his tour of Portugal, Kralev met with the head of the Ministry of Foreign Affairs’  Diplomatic Institute, Ambassador Freitas Ferraz, and the head of the Foreign Affairs Committee of the Portuguese parliament, Sergio Sousa Pinto. He spoke at an American Chamber of Commerce seminar and at the American Club. Kralev also lectured at the American Corners of the University of Lisbon, Aveiro and Porto. And taught at the Universities of Coimbra, Minho and at the Lisbon University Institute (ISCTE).

Nicholas Kralev is an author and entrepreneur specializing in international diplomacy, strategic communications and global travel, whose work has taken him to almost 100 countries. A former Financial Times and Washington Times correspondent, he has witnessed firsthand the conduct of American diplomacy while accompanying four U.S. secretaries of state on their travels around the world: Hillary Clinton, Condoleezza Rice, Colin Powell and Madeleine Albright. He is the founder and CEO of Kralev International LLC, a consulting and training firm with three practice areas: international affairs, communications and aviation. He is also the host and executive producer of the TV series on diplomacy Conversations with Nicholas Kralev.  He is the author of America’s Other Army and Decoding Air Travel.  He is a contributor to The Atlantic, Foreign Policy Magazine and The Huffington Post, and has appeared on NPR, CNN, BBC, Fox News, C-SPAN and local stations across the United States and around the world.

Images of this event can be found here: http://ow.ly/C9xY306jrNy