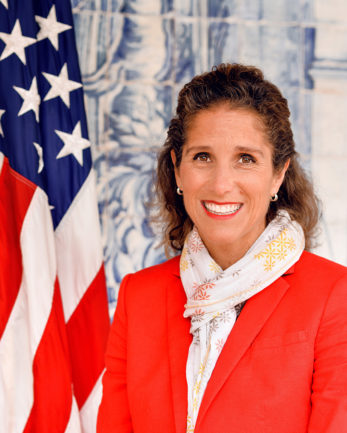 Kristin M. Kane is the Deputy Chief of Mission at U.S. Embassy Lisbon as of September 2019. She is a member of the Senior Foreign Service, Class of Minister-Counselor.

From 2016-2019, Kristin was the Political Counselor at U.S. Embassy Brasilia.  Before Brasilia, Kristin directed an African Affairs office in Paris.  In previous postings, she has served as Public Affairs Officer in Dakar, Maputo, and Lagos.

In Washington, D.C., Kristin worked on policy, press, and congressional issues in the bureau of International Organizations.  Early in her Foreign Service career, Kristin served in the Political-Economic and Consular sections at U.S. Embassy Lisbon.

Kristin is from Monterey, California.  She holds a Bachelor of Arts from University of California, Berkeley and a Master of Science in Foreign Service from Georgetown University’s Edmund A. Walsh School.  Kristin speaks Portuguese and French.  She is a Returned Peace Corps Volunteer (Fouta Djallon, Guinea) and has traveled through much of sub-Saharan Africa.  She is married to Hamed Lamine Kane, an IT specialist also in the Foreign Service, and they have two daughters.