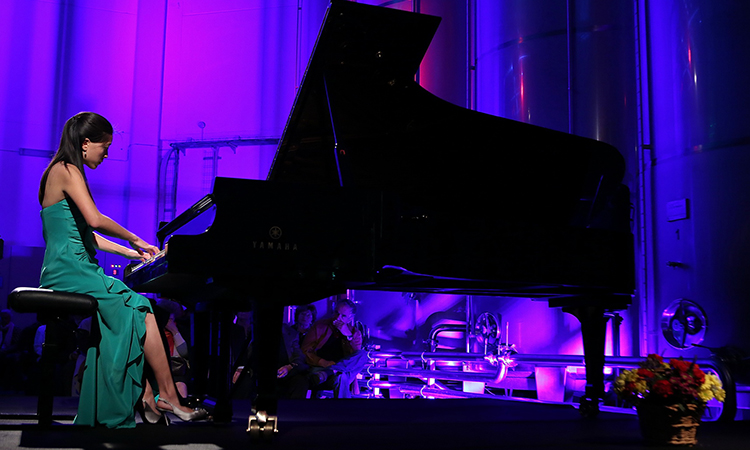 American pianist Pauline Yang to played a series of concerts sponsored by the U.S. Embassy in Portugal April 25-29.   Ms. Yang’s concerts at the Centro Cultural de Cascais, the U.S. Ambassador’s residence, Queluz Palace and as part of the Terras Sem Sombra program in Ferreira do Alentejo.  The unexpected venue for the concert in Ferreira do Alentejo, at Lagar do Marmelo,  added to the uniqueness of the evening where over three hundred spectators sat amongst the olive-oil making machinery and enjoyed a world class classical piano concert.  During an interview at classic radio, Antena Dois, Pauline explained that her selection of pieces “was meant to be a delightful potpourri of composers, styles, and eras from the piano literature which I deeply love, and my hope is that there will be something for everyone’s enjoyment.” The concerts featured works by Bach, Scarlatti, Mendelssohn, Chopin, Rachmaninoff, Brahms, Granados, Shuman, Liszt and Balcom. During a masterclass at the Lisbon Music School, Pauline explained to students that U.S. universities encourage musicians to double major including a topic outside music; quoting U.S. composer Christopher Rouse, informed citizens become better musicians and a better human being in the world.

Pauline Yang began her piano studies at the age of five and won her first international competition at the age of seven in Washington, D.C. In March of 1998, at the age of eleven, Ms. Yang made both her Philadelphia Orchestra debut as well as her solo recital debut at Carnegie Hall. In the same year, Ms. Yang entered The Juilliard School, where she won both the Pre-College’s concerto and scholarship competitions in her first year. She has since studied with Lee Kum-Sing in Vancouver, Susan Starr in Philadelphia, and John Perry in Los Angeles. Ms. Yang is on the faculty of Toby and Itzhak Perlman’s Perlman Music Program in Florida and Israel. Her solo and chamber music appearances have taken her throughout North and South America, Europe, Asia, and Africa. She has served as an Ambassador of Music for “Music in ME,” a non-profit organization that works with the United Nations to bring music to children in the Middle East and as a Volunteer Artist at Children’s Hospital Los Angeles and Massachusetts General Hospital. During her undergraduate studies at the University of Southern California (USC), she was a double-major in piano performance and political science, She also has master’s degrees in piano performance from USC and in international relations from Tufts University’s Fletcher School of Law and Diplomacy where she wrote her thesis on the roles of music at the White House and at state dinners. She has performed concerts and conducted public diplomacy events for U.S. Embassy Tokyo, U.S. Embassy Addis Ababa, and the U.S. Mission to the African Union.