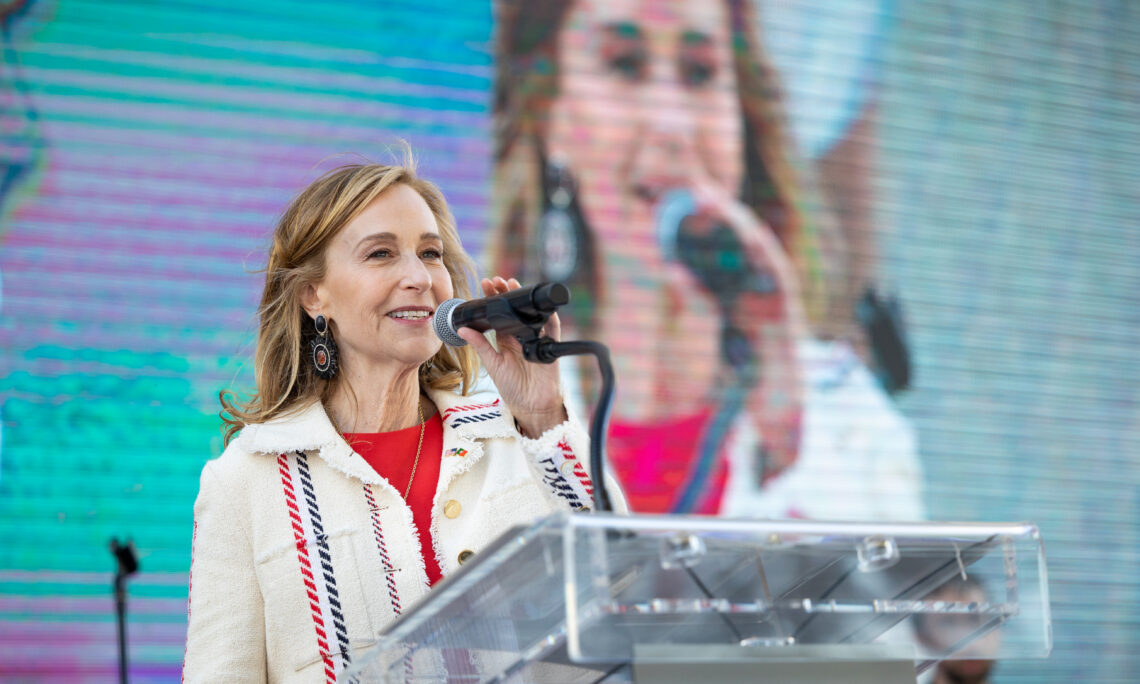 Bem vindos a todos, Good evening everyone. HELLO LISBON!!!
Thanks for joining us tonight to celebrate U.S. Independence Day!

I would like to give special thanks and welcome to:

Special shout out to our friends at FLAD for supporting the American Pops Orchestra from Washington DC!! The Pops have been teaching music and working with talented kids in the community these last few days and even held a free public concert yesterday at Praca Camoes! They are diplomacy in action.

And to my dear friend and celebrity chef Art Smith – who along with an amazing team of American chefs is cooking his famous fried chicken for all of you today – your humanitarian work is just as inspiring as your chicken! Yes, Art has cooked for Oprah and the Obamas, and now he is cooking for us!

Today marks a special day for Americans, for American traditions like barbecues, fireworks, and family time. And I am so lucky to be able to have my entire family here tonight – I would like to take a moment to introduce them all to you!

Independence Day also gives us a chance to remember who we are as a nation and as people. We honor those who have made sacrifices to protect our democracy and freedom.

New York is my home – and the theme for this year’s celebration. New York also played a huge ROLE in establishing U.S. independence. As one of the original 13 colonies it was the hub of culture and trade, and its port a gateway to the Atlantic – just as it is today.

Fun Fact – After a group of patriots signed the Declaration of Independence on July 4, 1776, they marked the first wave of democracy by toasting with Madeira wine, and pledged “their lives, their fortunes and their honor” to this bold new experiment.

Over the course of our Revolution for Independence, many hard-fought battles took place in New York to control the seaport. But it wasn’t just our forefathers who fought.

Since the birth of the United States, Portugal has been by our side, not just with the Madeira wine, but joining us in battle. Pedro Francisco, a young man of 16 years old from the Azores, volunteered for George Washington’s Continental Army. His bravery and dedication to the cause gained him recognition and Virginia, New Jersey, and Massachusetts, all erected statues in his honor.  The U.S. even issued a postage stamp in his memory on the bicentennial of the Revolution.

Breaking from the British empire was just the beginning of building of our democratic experiment. And once again, Portugal was by our side – as the second nation to recognize our republic.

George Washington understood the importance of Portugal and in 1795 commissioned John Street as the Azores’ first Consul. The Azores served as a stopping point for those making their way west. Now it is the oldest continually operating U.S. consulate we have in the world.

As the world learned of the opportunities that freedom and democracy brought – New York’s Ellis Island served as a beacon for immigrants seeking the American Dream. And from 1892 to 1954 more than 12 million people arrived in New York Harbor, passing through the island on their way to building a better life for their children and their children’s children. Including many Portuguese who now number more than 1.4 million strong in the U.S.

Then in 1974, almost two hundred years after the U.S. made its commitment to democracy, another nation made a similar commitment to freedom through revolution. Portugal’s captains of April – junior military officers – began a coup to release the grip of a 50-year strong dictatorship.  Their actions gained popular support and ended in a nearly bloodless carnation revolution. This time it was the United States and then Ambassador Frank Carlucci who stood with the Portuguese in the struggle for democracy.

When terrorists attacked the U.S. on 9/11 the world was reminded of the fragility of freedom. But once again Portugal was there, right by our side. You erected what was the first European monument to 9/11 – located not too far from this Embassy.

Today, freedom and democracy are under attack once again. When Putin’s Russia made its unprovoked invasion of Ukraine, he chose to deprive individuals of their liberty.  Once again, our two countries have joined together with likeminded free nations to protect our common rights and freedoms.

The United States and Portugal will forever be bound together by our common history and our influence on democratic movements around the world. Any true friendship is based on a set of shared values – which our two countries have shared since our Independence!

When President Biden offered me the opportunity to serve as Ambassador, I knew Portugal was the right place for me. I am truly honored to serve here, and I intend to travel this beautiful country and strengthen our friendship in my role as Ambassador.

In the short time I have been here I have fallen in love with PORTUGAL – its landscape, spirit,  and truly kind people.

So tonight we come together – Americans, Portuguese, and international friends – to celebrate our common ideals and our joint commitment to democracy, shared values and our life-long bond.

Please join me in a toast to freedom, just as our forefathers did when they signed the Declaration of Independence 246 years ago.