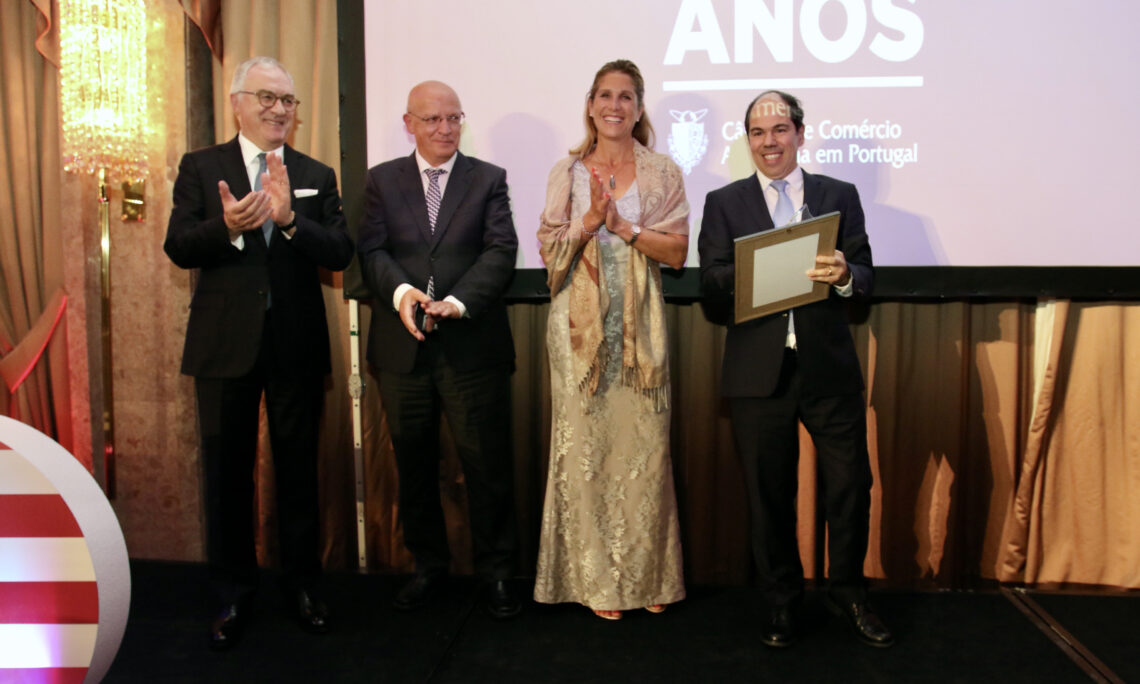 Boa Noite!  I am delighted to be celebrating with all of you 70 years of the American Chamber of Commerce in Portugal — and what better way than to be in this lovely setting with our friend and partner the Minister of Foreign Affairs, the honorable Augusto Santos Silva; and to award top companies for their efforts this past year.

To Antonio, Graça, and all the “AmCham” members, including past AmCham President Carlos Rodrigues, you exemplified fortitude and adaptability throughout the pandemic, never giving up and persistently finding ways to excel in business and also to do good for others at times of great need.   As they say, “We might be done with the pandemic, but it is not yet done with us” so please continue to show that innovation and care.

There are many crises and challenges today – the pandemic, climate change, migration, cybercrime… But tonight in the context of celebrating business and trade success I’d like you to consider with me the threat also to democracy.  As our President said, “It is absolutely clear that this is a battle between the utility of democracies of the 21st century and autocracies.”

I was pleased to speak on this theme with the United States National Endowment for Democracy’s 37-year president and the vice president just last month at the Estoril Forum.  One week ago today, our Vice President Kamala Harris spoke alongside French President Macron and other leaders at the Paris Peace Forum.  And in three weeks from now, President Biden will host, virtually, dozens of countries, including Portugal, at a Democracy Summit to make joint commitments to improve democracy around the world.  And while there is a bit of political turmoil happening now in Portugal with the snap elections in January, I find that Portuguese are always the hardest on themselves:  This country’s near 50 years of democracy since the Carnation Revolution have been impressive, right up through this month where your national hero Admiral Gouveia e Melo when asked if he would take up the reins again of leading Portugal’s COVID task force, resisted his celebrity and the opportunity for more power noting that in a democracy, military commanders must never overstep the role of the civil sector.  It was such a poignant remark and in a small way reminded me of our own General George Washington who of course became our first president and resisted the calls to stay on past two terms in power, setting the precedent for our nation’s 245 years of democracy.  In strong democracies like ours, leaders seek to better their countries, not just consolidate power.

This is my point:  Fair trade and commerce are inexorably linked to democracy, security, and peace.  The COVID pandemic has shown us vividly the risks of not respecting scientists, journalists, civil society, and transparency watchdogs when tackling global challenges.  Many U.S. companies were here a decade ago when Portugal was going through its troika plan to pull out of the global recession — to this day our economic relationship remains strong and we are Portugal’s most important non-European trade and investment partner – because of how we do business with you: openly and transparently, in line with the rules-based global order the United States and Europe created.  I am not talking about colonial-era relationships or mercantilist relationships.  I am talking about open, even partnerships, the sort of relationships democracies have.  Despite the pandemic, the trends for U.S. – Portugal bilateral trade and investment have been positive, and so is the outlook for the future.

Let’s talk about what we have:

There are up to 1,000 U.S. companies operating in Portugal, generating nearly 50,000 jobs.  Most U.S. companies in Portugal have been operating here for more than a decade, half for more than two decades.   Some choose Portugal for the talented workforce.  Some are excited for relatively low-cost renewable energy sources.  Some want to locate regional operations to expand business throughout Europe, or in Africa.  And who can resist the safe atmosphere, functional infrastructure, and nearly year-round sunshine?

U.S. companies invest in innovative Portuguese startups more than any other country, by a very large margin. When American entities come to Portugal, they come to stay, create jobs, and integrate into the community — like Google which has supported technology innovation and Marriott, which opened its doors to first line responders during the darkest days of the pandemic, exemplifying commitment to social responsibility and contributing positively in the community.  This is demonstration of American, and European, shared values – the bedrock of our relations.

At the same time, Portuguese companies have invested approximately $1 billion in the U.S. market — Awardees EDP and Colquimica are two examples, with EDP Renewables looking to make the United States its largest investment in 2022-2025, and Colquimica looking to expand its operations beyond North Carolina.

Another example of our open, values-based relationship is through the professional, cultural, and educational exchanges we run, or those run by our top partners like FLAD, also here tonight.  You may not know that the United States’ sixth largest service export is education – we believe that we have the top universities and research centers in the world, and we benefit from foreign talent just as those citizens upon returning to their countries provide great benefit back home.  We also run an array of cultural exchange programs, and I suspect the next U.S. Ambassador to Portugal, Randi Levine, an arts and culture expert with a business background, will expand these.  Each one is an equal exchange of ideas reflecting our joint commitment to openness and diversity, and new ideas.

Startups and digital companies will lead our relationship into the future.  Earlier this month at Web Summit, I met up with Portuguese tech entrepreneur Daniela Braga, Founder and CEO of Defined.ai on her work on Artificial Intelligence.  A dual citizen, Daniela was invited by President Biden to join the National AI Research Resource Task Force and thereby have direct influence on technology policy of the United States — a grand honor for both countries.

I also learned at the Summit that in relation to its population, Portugal has more unicorns – companies valued at one billion euros or more – than any other European nation, wow!  Of those five unicorns, four — Talkdesk, Feedzai, Remote, and Outsystems – are Portuguese-grown and U.S.-based.  I am confident there will be additional shared unicorns to come.

After last month’s visit to Portugal of 35 Californian state government, civil society, and business executives to exchange ideas and practices on renewable energy, green technology, and innovations to fight climate change, partnerships between California and Portugal are on the rise.

In another exciting development and reflecting our government’s commitment to diversity, an aspect of a strong democracy, the U.S. Department of Commerce announced a Minority Focused Trade Mission to Italy, Spain, and Portugal in May 2022.  This trade mission composed of mostly minority-owned businesses wants to do business with Portuguese companies.  We are confident that this will be a success and a wonderful experience for everyone involved, including of course, AmCham.

I would be remiss not to mention that this past Monday, President Biden signed into law a $1 trillion piece of legislation that constitutes the largest federal investment in infrastructure in a generation.  As Portugal deploys its own post-pandemic Recovery and Resilience Plan, it’s exciting to see our countries move in tandem in very similar priority areas: transportation, with railway and public transit at its core, clean energy and next generation broadband among them. In the words of President Biden: “this is a once-in-a-generation investment to create good-paying jobs, modernize infrastructure and turn the climate crisis into an opportunity”.

What I am attempting to leave you with in this speech is that that United States has been for centuries and continues to be a friend of Portugal – not just because of our deep history, with mainland Portuguese and Azoreans making their way to the East Coast, California, and Hawaii.  Not just because you were the 2nd country to recognize the independent United States and that our founders toasted over Madeira wine.  Not just because Portugal is becoming so attractive to American tourists, retirees, and entrepreneurs that it’s being called the ultimate California dream.  We do celebrate all of this.  But our relationship beyond the shared geography and history is special because of our shared values.

The nexus between freedom, tolerance and economic prosperity reminds us of Almeida Garrett — national hero, writer, poet and politician, who passionately advocated for these principles. Mandated by Queen Dona Maria , Garrett  negotiated the first Trade and Navigation Treaty between Portugal and United States, in 1840 when our country was still very young. In one of his many novels advocating for freedom over tyranny, and tolerance over fanaticism, he wrote:  “Bem nasce em todos os climas a semente da liberdade; mas desde que lhe germinam as folhas seminais, há-de haver um Washington que a monde, e ampare, ou os espinhos são tantos logo, tantos os cardos e abrolhos, que a afogam.” In sum, the seeds of freedom demand constant work, attention, and affection to keep blossoming. Portugal embraced its new partner from early on. The spirit of that treaty, looking to deepen our economic and investment ties lives on today, stronger than ever.

Our commitment to democracy, openness and security underpins the way we and you do business, and how we can be so successful together. So while we celebrate the awardees tonight, so well deserved, I would also like to celebrate our rock solid bilateral relationship, with the Minister and the government, but also with the broader civil society and of course with all of you.   I look forward to continuing to work together to ensure prosperity for both the U.S. and Portugal.   Thank you.