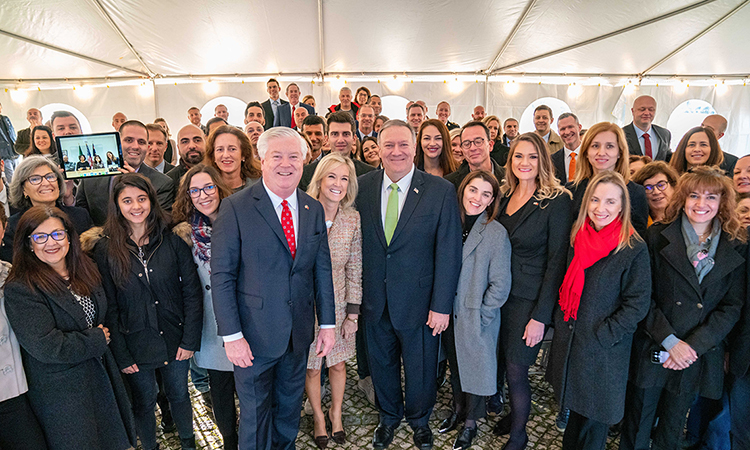 Secretary Michael R. Pompeo led the first bilateral Secretary of State visit to Portugal since 2008 on December 4-5.  His meetings with the Portuguese Prime Minister António Costa, Foreign Minister Augusto Santos Silva, and Defense Minister João Cravinho affirmed our strong alliance and partnership with our NATO co-founder and host of our 65th Air Base Group in the Azores.

Secretary Pompeo also discussed strategies for promoting democracy and security in Europe and elsewhere in the world, including Venezuela and Africa.  In addition, he communicated the risks of Chinese investment into Portugal – whether it be through 5G networks or infrastructure at Portugal’s deep water port, Sines.

In Portugal, he also met with Israel’s Prime Minister Benjamin Netanyahu about how to counter Iran’s destabilizing force and growing aggression in the region.  A secure Israel – a beacon of democracy and stability in the Middle East ‒ is greatly in America’s national security interest.

One of the highlights for the Mission was the Secretary’s Meet and Greet with Embassy staff and their families.  Secretary Pompeo spoke with them in our beautiful Embassy courtyard and via video to Consulate Ponta Delgada, the longest continually-functioning U.S. Consulate in the world.