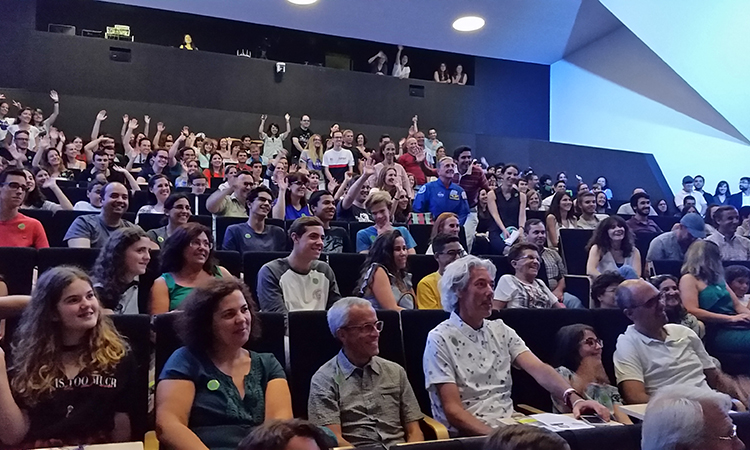 Former NASA astronaut Donald A. Thomas was in Portugal on July 27 and 28, 2018, to be the guest speaker at the International Physics Olympiads in Cascais and at a joint event organized by Ciência Viva/ESERO Portugal, the U.S. Embassy and FLAD at the Pavilion of Knowledge – Science Center.

Donald Thomas addressed in both programs the topics of science and space exploration, and the title of the talks/presentations was “Overcoming Obstacles and Reaching for the Stars!” sharing with the public details of his space missions.

After working at AT&T Bell Laboratories in Princeton, New Jersey, Lockheed Engineering and Sciences Company in Houston, Texas, in 1988 Donald Thomas joined NASA’s Lyndon B. Johnson Space Center as a Materials Engineer. Selected by NASA in January 1990, Dr. Thomas became an astronaut in July 1991. In his last assignment he served as the International Space Station Program Scientist overseeing NASA experiments performed on the ISS. Dr. Thomas retired from NASA in July 2007 in order to pursue private interests. Don Thomas is an astronaut, scientist, professional speaker and author of “Orbit of Discovery” about his STS-70 mission aboard Discovery spacecraft.

The session at the Pavilion of Knowledge – Science Center was full house. Live streaming was made available for the many unable to attend.