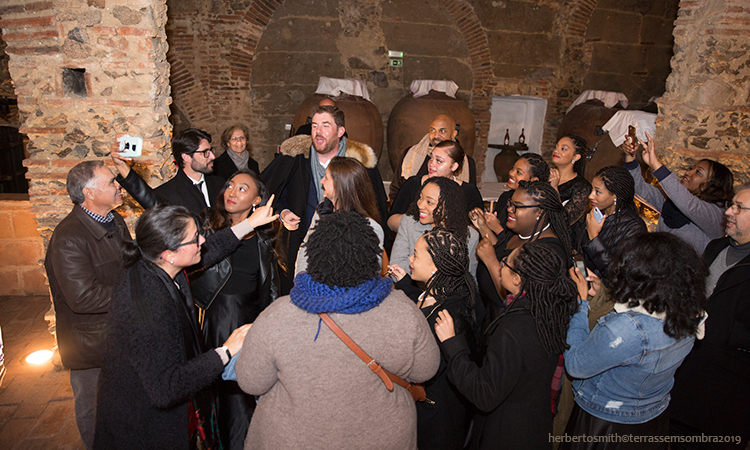 The choir participated in an impromptu sing-off with Cante Alentejano singer, Pedro Mestre.

The Spelman College Glee Club performed during the opening concert of the Terras Sem Sombra Festival in the Alentejo Saturday, January 26, at Vila de Frades in Vidigueira. The choir was a huge success, singing to a standing room only audience at the São Cucufate Church. The choir is made up of women undergraduate students, and its repertoire consists of sacred and secular choral literature for women’s voices, with a particular focus on traditional spirituals, music by African American composers and from other cultures.

Past performances have included the Lincoln Center and a March 2016 performance at the White House for President Barack Obama.

During their stay, the choir visited the town of Vidigueira, where you can see an impressive statue of the 15th century Portuguese explorer, Vasco da Gama, 1st Count of Vidigueira, discoverer of the maritime route to India.  Vasco de Gama’s original burial place was the Reliquias Convent in Cuba, but in 1880, his remains were moved to the Jerónimos monastery in Lisbon. After an amazing performance, the choir had dinner and participated in an impromptu sing-off with famous Cante Alentejano singer, Pedro Mestre at a restored 12th century wine cellar, the Cella Vinaria Antiqua. During the weekend, cultural heritage and the biodiversity were key themes, featuring museum tours and breadmaking workshops at local bakeries.  The final activity of the weekend included a visit to the Pedrogão do Alentejo dam, where the group visited the fish elevador (which allows fish to swim upstream to reproduce), as well as did a scenic hike.