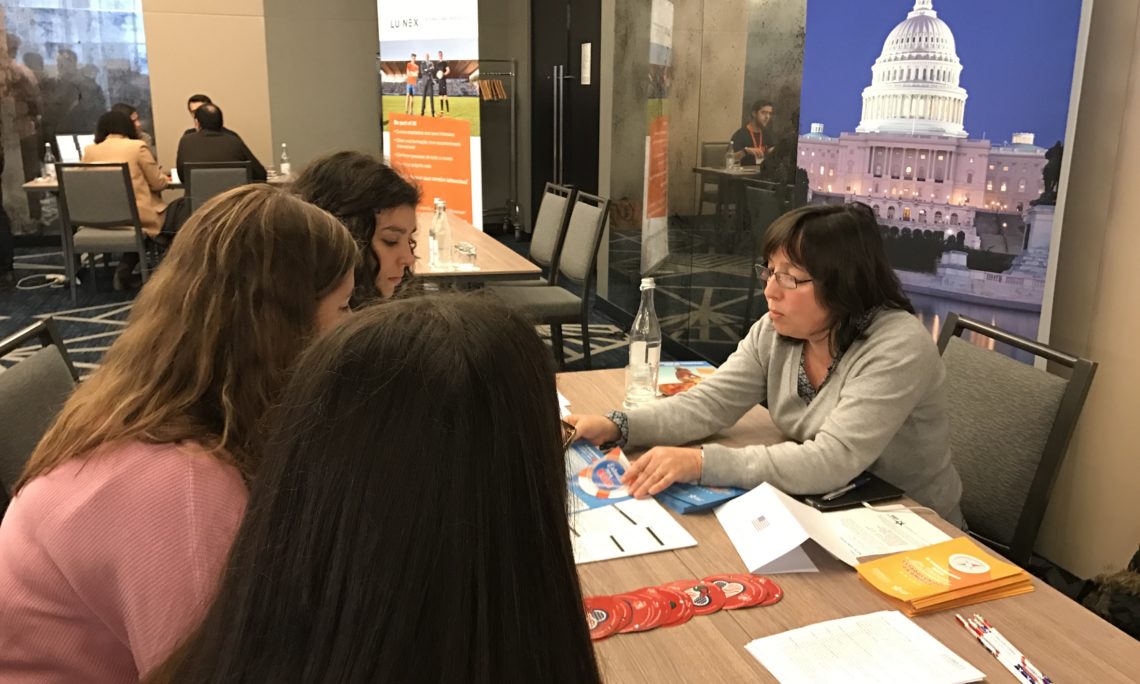 From March 4-7, the U.S. Embassy, Office of Public Affairs, partnered with EducationUSA in Portugal, located within the Fulbright Commission in Lisbon, to participate in the fourth edition of the Study Abroad Portugal fair, the largest information fair for Portuguese students wishing to study abroad.  The fair offers an opportunity for students, parents, and teachers to learn first-hand about the U.S. higher education.  In all three cities, the Office of Public Affairs took the opportunity to inform high schoolers about the Benjamin Franklin Transatlantic Fellow Institute, especially directed to youth, ages 16-18, which call for nominations was underway.

The fair began on Saturday in Lisbon. This is third time the U.S. Embassy/EducationUSA participate in this event.  The majority of interested students were high schoolers who also brought their parents to hear about what opportunities there are to study in the U.S.  Post-graduate students seeking information on Fulbright internships and special Fulbright programs also came by the U.S. Embassy/EducationUSA booth.

The second stop was in Porto.  This was the second time the U.S. Embassy/Education USA participated in this event in the North of Portugal.  There is a high demand for this kind of information in the northern part of the country. Despite the event taking place on a Sunday, the majority of interested students came from universities outside of the city of Porto who travelled from afar to receive first-hand information on post-graduate courses in the U.S.A.

Funchal, on Madeira Island, was the last stop.  This was also the second time the U.S. Embassy/EducationUSA travelled to Madeira.  The event took place at two high schools, in the morning at Escola Secundaria Francisco Franco, and in the afternoon at Escola Secundaria Jaime Moniz.  Students visited the booth with their teachers of English to find out about the U.S. higher education and, also, demonstrate their English language ability.

More than 400 students visited the U.S. Embassy/ EducationUSA booth throughout the three days.  Promoting education exchanges and raise awareness on U.S. universities is a top priority for the U.S. Embassy and our partners at the Fulbright Commission.  You can learn more here  about the opportunities available to students and researchers at all levels.