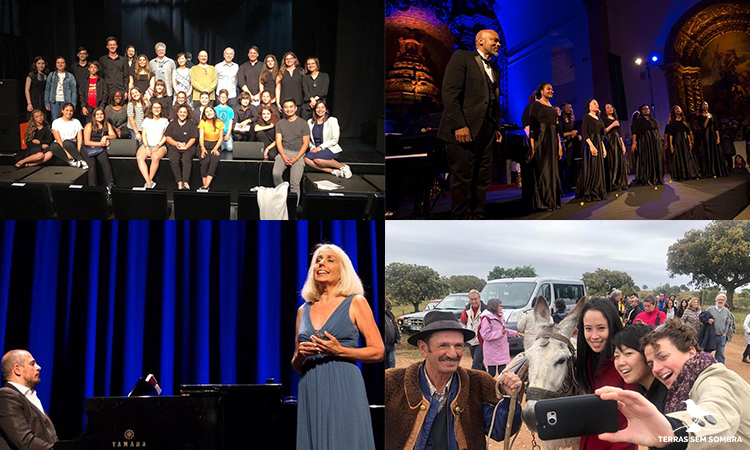 In 2019, for the first time as the nation of honor, the United States funded four concerts by top American artists at the Terras Sem Sombra Festival (TSS). TSS celebrates the Alentejo region’s music, heritage, and biodiversity. With the aim of sharing the cultural and environmental legacy of the region, the festival highlights everything from historical centers to rural areas, as well as wildlife and local ethnographies. In addition to 14 classical music concerts, the festival includes master classes, thematic conferences, guided tours, and practical training. In its 15th year, the festival started in January and concluded in July 2019.

Spelman College Glee Club in Vidigueira
The Spelman College Glee Club performed during the opening concert of the Terras Sem Sombra Festival in the Alentejo Saturday, January 26, at Vila de Frades in Vidigueira. The choir was a huge success, singing to a standing room only audience at the São Cucufate Church. The choir is made up of women undergraduate students, and its repertoire consists of sacred and secular choral literature for women’s voices, with a particular focus on traditional spirituals, music by African American composers and from other cultures. Past performances have included the Lincoln Center and a March 2016 performance at the White House for President Barack Obama.

During their stay, the choir visited the town of Vidigueira, where you can see an impressive statue of the 15th century Portuguese explorer, Vasco da Gama, 1st Count of Vidigueira, discoverer of the maritime route to India. Vasco de Gama’s original burial place was the Reliquias Convent in Cuba, but in 1880, his remains were moved to the Jerónimos monastery in Lisbon. After an amazing performance, the choir had dinner and participated in an impromptu sing-off with famous Cante Alentejano singer, Pedro Mestre at a restored 12th century wine cellar, the Cella Vinaria Antiqua. During the weekend, cultural heritage and the biodiversity were key themes, featuring museum tours and breadmaking workshops at local bakeries. The final activity of the weekend included a visit to the Pedrogão do Alentejo dam, where the group visited the fish elevador (which allows fish to swim upstream to reproduce), as well as did a scenic hike.

Delphi Trio in Beja
The Delphi Trio were the second American music ensemble, performing in Beja on Saturday, April 6, during the Festival Terras Sem Sombra, as the United States is the 2019 Festival’s Nation of Honor. Before the festival, they did cultural outreach, taking a tour of local fountains in Beja. At the Festival, the Trio performed in front of a standing room only audience of more than 400 spectators in the historic Pousada de São Francisco. At the concerts, the Delphi Trio’s repertoire included: Piano Trio No. 1 by American composer Pierre Jalbert and Piano Trio No. 2 by Franz Schubert. The day after the concert, they joined a group of about 50 festival participants to do more public engagements including: a tour of historic shepherd routes in Beja, the observation of traditional wool making practices, a performance of a local Cante Alentejano choir, and a closing festival lunch with fresh, typical food from the region. Prizewinners of the 2015 Orlando Concours, the Delphi Trio is a reference in the world of chamber music playing regularly across USA as well as in numerous European countries.

Ellen Rabiner in Barrancos
The American contralto, Ellen Rabiner, was the third American music performer, singing in Barrancos on Saturday, June 6, during the Festival Terras Sem Sombra. The concert took place in the Cineteatro Municipal in Barrancos with an audience of almost 100 people. Ellen Rabiner’s repertoire included U.S. composers Samuel Barber, Paul Bowles, as well as Portuguese composer Alfredo Keil. Ellen Rabiner, made her Met Opera debut in 1994 as Erste Magd in Elektra, returning to that house during 17 more seasons. She has also performed with the York City, Santa Fe, Washington D.C., Dallas, Seattle, Michigan and San Diego operas. The pianist, Nuno Margarido Lopes, has been the Conductor of Coro Juvenil de Lisboa since its formation in 2011.

That night, the cultural program for the weekend was a guided tour of the magnificent night sky of Noudar, guided by the Polar star. The Terras public observed the Moon, counted the Galilean moons that orbit Jupiter, and examined the rings of Saturn. On Sunday, the biodiversity program reflected the truth that Portugal has the highest incidence rate of rural fires in Southern Europe. In this activity, participants learned about the close and productive cooperation between local firefighters, government officials, and first responders, in an area of high environmental value located on the border with Spain. Participants even got to try on firefighting gear and plant trees with local forest fire fighters.

Krono Quartet in Sines
The Grammy award winning Kronos Quartet was the fourth and final American music ensemble, performing in Sines on Saturday, July 6, during the Festival. The concert took place in the Centro de Artes de Sines with a soldout audience of more than 300 people. At the concerts, Kronos’ repertoire included music by U.S. composers Steve Reich, John Coltrane and George Gershwin. The encore included Portuguese composer Carlos Paredes’ Verdes Anos leading to prolonged and enthusiastic applause. Over the course of almost half a century of its existence, Kronos Quartet has become one of the most celebrated and influential groups of the world, performing thousands of concerts, releasing more than 60 recordings and collaborating with many of the most important contemporary composers and performers.

On Saturday afternoon, the cultural program for the weekend was a guided tour of the local lighthouse. The Alentejo coast observed countless shipwrecks and was extremely dangerous to navigation before the existence of light signals. On Sunday, the biodiversity program explained local marine conservation practices. At the port of Sines and local beaches, the permanent monitoring and evaluation of the quality of the marine environments contributes to the production of good quality fish hence promoting the development of an ecologically sustainable and viable industry.

Described by Terras sem Sombra as the most productive visit in the festival’s 15-year history, members of a 50-person delegation that went to Washington, D.C. in January, established relationships with Portuguese-American Members of Congress and initiated ventures with U.S. businesses and industry associations. From the world-class concerts, to the commercial delegations, to our continued efforts to promote economic opportunities in the Alentejo – these consistent engagements underscore the Embassy’s commitment to strengthening a U.S.-Portugal relationship that goes far beyond business ties. We are true allies, partners, and friends.