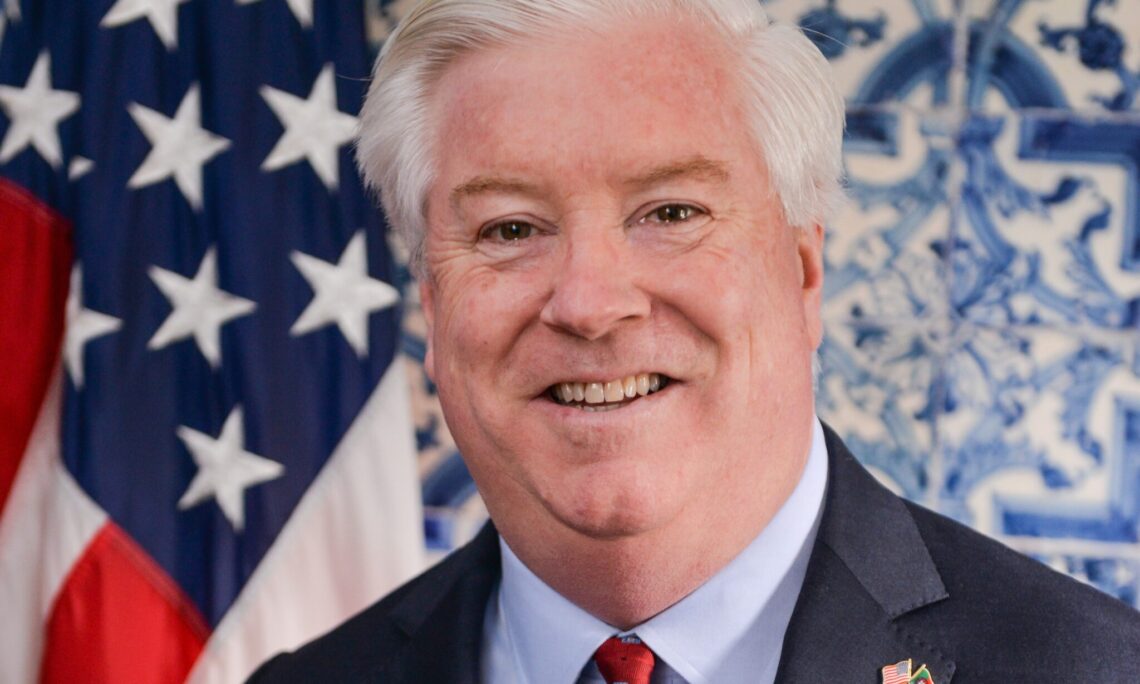 As I close my 3rd year here in Portugal as the longest-serving U.S. Ambassador in Europe of the Administration of Donald J. Trump, I look back with pride on the accomplishments that have underscored our shared values and advanced our foreign policy goals in Portugal and throughout Europe. President Trump sent a group of us to carry through his vision and policies, and with his leadership, we did more than “get stuff done”, we transformed the relationship for the better, for us, and for Europe.  The President has been able to accomplish a great deal– much more, I dare say, than for which we get credit.  Let me elaborate.

To start, President Trump said our trans-Atlantic alliance, NATO, needed to be carried not just by the United States but by all partners.  Working with Secretary-General Stoltenberg, we are now sharing these costs:  At the start of the Administration. only three NATO allies were spending 2% of GDP on defense as we all pledged to do so at Wales.  By 2019, five more countries met their full 2% commitments and almost all NATO allies have a plan to do so in the next four years.  This represents an increased investment by $130 billion since President Trump took office and a commitment of billions more.

Burden sharing at NATO represents a commitment to our shared defense, even in the face of economic downturn.  Through NATO, we increase our ability to defend universal freedoms and human rights from the worldwide threats we face today. We will continue to work with countries like Portugal, a founding member of NATO, so that it reaches its pledge by 2024, while of course acknowledging its contributions to NATO operations in Afghanistan, Iraq, Lithuania and the high seas, as well as to EU and UN missions in the Mediterranean, Mali, the Central African Republic, and Somalia.  Beyond hosting the U.S. Lajes Air Field in the Azores, we also applaud Portugal for its excellent hosting of NATO’s Naval Striking and Support Forces (STRIKFORNATO), while still reminding that burden sharing means we all share in the costs of the world’s premier defense alliance.

As President Trump says, “No administration has been tougher on China than this administration” – and that’s because after 30 years of hoping the PRC would join our democratic values and systems, it hasn’t, and we must realize that and take action to protect ourselves and all that we hold dear.  The unfair economic tactics and undemocratic practices of the PRC are a threat to Europe and the United States alike, and we must partner together to uphold the open and competitive systems that we have together built for our mutual prosperity.  We must build strong, secure 5G networks and phase out untrusted vendors, like Huawei, from growing and eventually having control not just of our data but our entire networks.

More countries must take a stand.  Let’s resist Chinese Communist Party efforts to undermine sovereign nations and manipulate our economies. With the Trump Administration’s leadership on combating dangerous PRC influence, more countries will do as the United Kingdom did and shut down PRC’s attempts to open a backdoor to our democratic societies. Western technology can and is competing with PRC-backed firms on price and performance. Portugal will soon conduct its own spectrum auction, and we call on it to make the best decision to protect national security and citizens’ personal information.  Nothing short of our civil liberties and the foundations on which our societies were built is at stake.

Our security efforts do not stop with NATO or 5G networks. COVID-19 presented unique challenges to Transnational Criminal Organizations (TCOs) attempting to smuggle cocaine across the Atlantic, but they also attempted to seize openings created by the pandemic to traffic drugs through what they thought would be less-monitored routes.  Working with MAOC based in Lisbon, we targeted and interdicted drug traffickers from Venezuela, Brazil, and others. In the three years prior to my arrival (2013-2016) they seized 119.8 metric tons of drugs and $3 million in assets and cash.  Since my arrival (2017 until present) we seized 210.98 metric tons of drugs and nearly $176 million in assets and cash.

We also ensured our economic progress reflects our democratic traditions, to keep trade flowing between those with shared values and interests. Total trade in goods and services between Europe and the United States increased from $1.3 trillion to roughly $1.6 trillion, while U.S.-Portugal bilateral trade in goods and services reached $8.9 billion in 2019, an increase of 40% from 2016.  In the agricultural sector alone, we increased two-way trade by 54 percent to $480 million between our two countries.

Our bonds grow stronger each day as more students travel to the U.S. to take advantage of our world-class education system (the United States’ fifth largest economic sector). Last year, the U.S. and Portugal signed a Memorandum of Understanding to create an exchange program, providing up to 12 months of training for students interested in learning about innovation and organizational growth. These types of opportunities promote mutual prosperity, create jobs, and boost the kind of growth we have seen with companies like Google, Cisco, and Oracle, which expanded into the European market to engage Portugal’s talented English-speaking workforce. At the same time, Portuguese companies like Feedzai, Outsystems, and Talk Desk now have a firm foundation in the United States.

It is not just IT firms that are finding a home here.  Health care companies and consulting firms, among others, are finding opportunity in Portugal’s transparent and open economy.  Beyond their commercial ventures, American companies are members of the Portuguese community, offering a helping hand during COVID-19.  And now, as our economies recover from the pandemic, I am confident that American investors will be among the first to venture back to Portugal.

While we don’t always get credit for it, under President Trump the trans-Atlantic relationship, within it the special and enduring U.S. – Portugal relationship, not only remains steadfast, but it has grown (even if there were some uncomfortable moments that the closest of allies face).  Through more equally sharing the costs of our NATO alliance; combating PRC manipulation of markets and data; increasing trade; and thwarting terrorists and drug traffickers; we have succeeded.  We have also continued to build the incomparable U.S. – European people-to-people ties.  President Donald J. Trump sent us out as Ambassadors to deliver on his goals, and we did so, from Portugal to Poland, in the UK and in France, and beyond.  Due to the Trump administration’s foreign policy achievements, we have set the stage for a post-COVID-19 economic recovery that remains true to our shared and indelible democratic ideals.