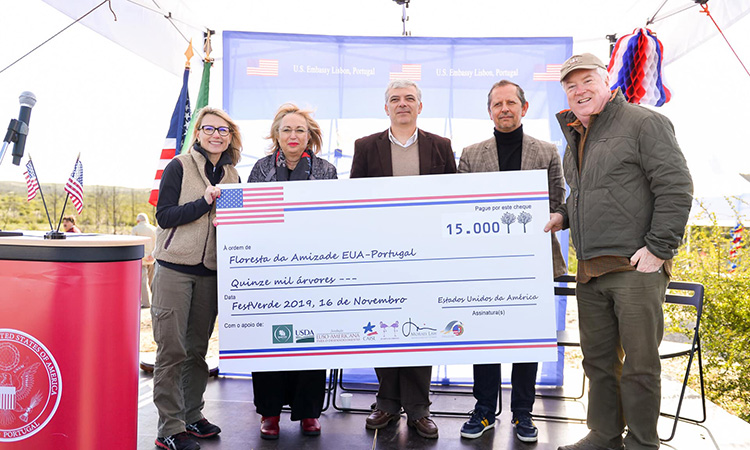 Building on the knowledge and contacts developed during the our 22-day Reforestation Nation Earth Day campaign in April 2019, the U.S. Embassy hosted a community event called FestVerde.  FestVerde demonstrated the American people’s solidarity with communities in recovery from forest fires, underscored U.S. values of service and volunteerism, and served as a model for community-led, reforestation efforts.  As a show of our commitment to working side by side to solve shared challenges, the U.S. government with support from partners on both sides of the Atlantic, celebrated the donation of 15,000 trees to the U.S.-Portugal Friendship Forest in the beautiful Pinhal de Leiria.

During the official ceremony, in addition to Ambassador Glass and Mary Glass highlighting the U.S. government’s commitment to cooperation on environmental issues, the Mayor of Marinha Grande, Cidália Ferreira; the President of Quercus, Paulo do Carmo; and the President of ICNF, Nuno Banza also delivered remarks that celebrated the community event and highlighted the strength of the U.S.-Portugal friendship.