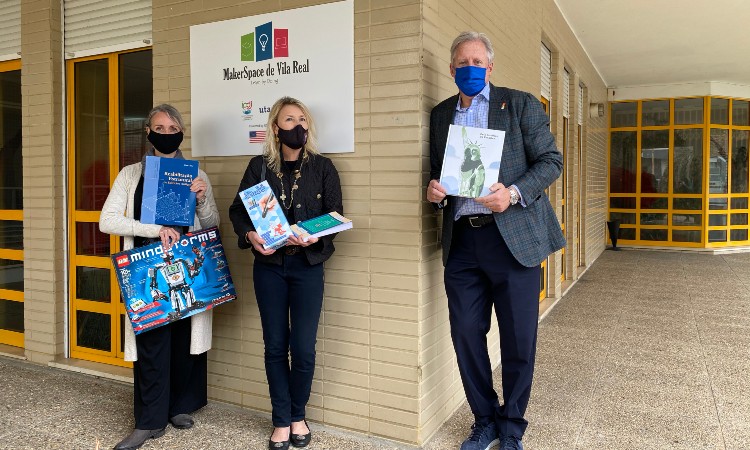 The IPDJ in Vila Real received a visit from a delegation of the U.S. Embassy in Portugal, which included the Ambassador’s wife Mary Glass, Public Affairs Officer Penny Rechkemmer, and the Director of the Luso-American Development Foundation Jim Kelly; to learn about the evolution MakerSpace as well as offering a book donation to the space.

The Regional Director of the North, Vitor Dias, was also present at the event, as well as Vila Real’s City Councillor – José Maria Magalhães, Paulo Ferraz of the UTAD Administration Council, Prof. Artur Cristóvão, Vice-Rector for the Internationalization of UTAD, and the Directors of the School Group of São Pedro, Diogo Cão, Morgado de Mateus and Camilo Castelo Branco.

The MakerSpace in Vila Real was funded by the U.S. Embassy and will count on the collaboration with UTAD for the promotion and development of activities and workshops based on new information and communication technologies.

Through the “Learn by doing” concept, this innovative space aims to stimulate the youngest and the community in general through means such as 3D printers and robotics. Here, they will have the opportunity to create and innovate in real projects in the area of ​​entrepreneurship.